Personnel is Policy: Changes of Agency Leadership under a Biden-Harris Administration

The outcome of recent national elections will result in a change of Administration and control of both houses of Congress by the Administration’s political party. As a result, there will be a change in national policy and in the leadership of the agencies that will oversee and enforce it. This post will review currently announced and potential changes to the leadership of Federal agencies that exercise supervisory and regulatory power regarding financial services and housing and the policy impact such changes may have on the Biden-Harris Administration’s racial equity and climate action goals. A “scorecard” of such agencies’ leadership, present and prospective, is appended to this post for the reader’s convenience.

Some changes in agency leadership are possible at the outset of the new Administration and some may occur later, to wit:

The changes just noted are in addition to the appointment of new leadership at the executive agencies of the Federal Government, the most important being, for purposes of this discussion, the Departments of Treasury, Justice, and Housing and Urban Development.

The Biden-Harris Transition Team has highlighted four priorities to be addressed when in office: the Covid-19 pandemic; economic recovery; racial equity; and climate change. These priorities are multi-faceted, interrelated, and challenging. Making progress on them will require a combination of legislative and administrative action. The discussion that follows focuses on how two of the priorities – racial equity and climate – can be addressed by agency action.

While the topic of racial equity is, sad to say, a broad one, any meaningful attempt to deal with it involves redressing the wealth gap between African Americans and other Americans. And a key to addressing the wealth gap is the disparity in housing wealth that has resulted from Jim Crow, past federal housing policy, and discriminatory sales and lending practices and zoning laws. Effectively addressing this aspect of the racial equity goal will require that the incoming Administration enforce Federal fair housing laws and increase the availability of affordable rental housing and low-and moderate-income homeownership.

The announced appointments to the Justice Department and HUD make clear that the incoming Administration will pursue robust policies regarding discrimination, through the reinstitution of the disparate impact doctrine and enhanced enforcement. It will also probably reverse the OCC’s recent attempts to gut the Community Reinvestment Act (CRA) and support some version of the Federal Reserve’s proposed CRA rule to promote credit availability. New leadership at HUD will no doubt use the tools available to it to increase available affordable rental housing and low- and moderate-income homeownership, assuming adequate funding. The role that Fannie Mae and Freddie Mac will play in addressing this priority will depend on the outcome of Collins v Mnuchin and possible Congressional action to end FHFA’s conservatorship of them.

However, as Sarah Bloom Raskin has recently written, there is now reason for hope:

… with the Federal Reserve having recently joined other central banks to support the Paris climate goals and an engaged new administration on the horizon, 2021 could be a chance for the US to leapfrog into global leadership by embracing the potential of America’s complex financial regulatory system.1

Professor Raskin goes on to point out how financial regulatory and supervisory agencies can and should adapt to address the risks presented by climate change. The FinReg Blog has published a complete volume of articles about whether and how such action should be taken. When the Biden-Harris Administration is in office US supervisory and regulatory agencies will be led by people who will take such actions and will be acting in concert with the stated policy of the Executive when they do.

The Biden-Harris Administration faces an array of political, social, and economic problems that is daunting and complex. The issues discussed in this post only scratch the surface of two of the priorities the Biden-Harris Transition Team has set to address such problems. That said, the post shows how changes to the leadership of administrative agencies can and will make a difference. Personnel is, in fact, policy. The new leadership will have a lot on their plates; let us hope they succeed.

Agency Leadership Scorecard (Can’t tell the players without one) 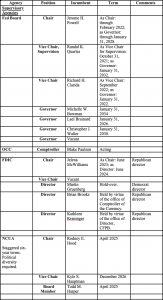 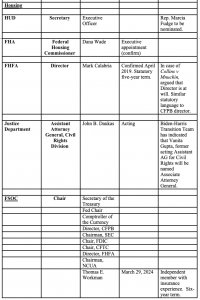 Joseph A. Smith, Jr. is a senior fellow at the Global Financial Markets Center at Duke Law and the former North Carolina Commissioner of Banks.

3 thoughts on “Personnel is Policy: Changes of Agency Leadership under a Biden-Harris Administration”