The past few years have been marked by many tax scandals: LuxLeaks in 2014, SwissLeaks in 2015, Bahamas Leaks and the Panama Papers in 2016, and the Paradise Papers and Malta Files in 2017. Last month, the International Consortium of Investigative Journalists (ICIJ) published the FinCEN Files, and in so doing provided a glimpse into the role played by major banks in global money laundering. These scandals have inevitably had a special resonance in public opinion at a time when societies are struggling with budget deficits, rising inequalities, and a pandemic underlining the importance of public goods.

A specific group of firms is very often accused of large-scale tax avoidance – multinational corporations. These firms, few in number but large and very productive, exploit technicalities of the law to reduce their tax liability. They artificially decrease profits recorded in high-tax countries and inflate those reported in low-tax countries, particularly tax havens like the Bahamas, Ireland, and Luxembourg, thereby decreasing their average effective tax rate. This is what’s known as “profit shifting”. Armed with experts and consultants that only such companies can afford, multinational enterprises implement a battery of tax schemes. Despite being opaque by nature, these practices are now quite well-known, both by researchers (Beer et al., 2020) and policymakers (US Senate, 2014). The factors pushing firms to engage in profit shifting and more broadly tax avoidance are, however, relatively less understood (Wang et al., 2020).

Import competition as a determinant of tax avoidance

In a new working paper, I highlight the impact of one aspect of globalization on corporate tax avoidance – import competition. To do that, I exploit a rich database on financial statements of publicly-listed manufacturing firms headquartered in the U.S. and bilateral trade flows between the U.S. and other countries. On this basis, I construct four complementary measures of corporate tax avoidance and examine how these indicators evolved between 1990 and 2005 in reaction to the so-called “China shock”, i.e., the rapid surge of exports from China.

The rationale for this focus on China is three-fold. Within a few years, China became the largest supplier of manufactured products to the U.S. Plus, sectors were not equally affected by rising Chinese import competition. While industrial machinery and equipment, for instance, experienced a real boom in imports, other sectors like food and related products suffered from import competition to a lesser extent. This variation, over time and across sectors, can thus be used to investigate how import competition affects corporate tax avoidance. Finally, concentrating on imports from China allows me to use the U.S. conferral of the Permanent Normal Trade Relations status on China in 2000 as a quasi-natural experiment to have exogenous variation in import competition.

The study first shows that manufacturing sectors in which Chinese import competition rose the most in the U.S. are also those in which tax avoidance subsequently increased the most. Next, I demonstrate that this pattern is statistically robust and cannot be attributed to confounding factors (i.e., other variables correlated with both import competition and tax liability). The causal interpretation of the results is possible thanks to the use of instrumental variables and the aforementioned quasi-natural experiment. Overall, the findings suggest that the China shock had a substantial impact on the average effective tax rate of publicly listed manufacturing firms headquartered in the U.S. According to my calculations, absent rising Chinese import competition between 1990 and 2005 and all other things being equal, the average effective tax rate could have been around 1 percentage point higher in 2005 (Figure 1). In other words, the tax avoidance effect induced by the China shock could explain nearly 17 percent of the decline in the average effective tax rate observed in that period. 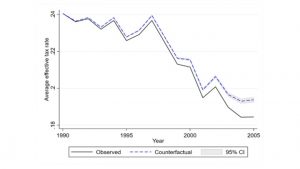 The big question is: what happened? To dig into this, I divide the sample into two groups as a first step: domestic firms on the one hand and multinational firms on the other. Interestingly, there is no systematic evidence in the data of a positive effect of import competition on corporate tax avoidance among domestic firms. In fact, only multinational corporations avoided more taxes in reaction to the China shock. This discrepancy is reminiscent of profit shifting. As discussed above, one difference between domestic and multinational enterprises is that the latter have more strings to their bow when it comes to aggressive tax planning, insofar as they can move profits across their affiliates.

Multinational firms employ three main techniques to artificially transfer profits from high- to low-tax countries for tax optimization purposes. First, they can manipulate transfer prices, i.e., distort the price of the transactions made between their affiliates. Second, they can take advantage of the tax-deductibility of interest payments and adjust the capital structure of their affiliates by using intra-firm loans. Third, multinational enterprises might want to locate intellectual property rights in tax-friendly jurisdictions and make affiliates located in high-tax countries pay royalties for the use of intangible assets.

To sum up, we have seen at this point that i) the China shock prompted multinational firms to invest in intangible assets and ii) this increase allowed these companies to save more taxes. A final and crucial question remains unanswered: did multinational firms invest in intangibles primarily to alleviate losses in sales through profit shifting? Or, on the contrary, did they seek to differentiate and escape competition from Chinese products in the first place?

The study provides some hints about this and speaks in favor of the second proposition. Consistent with economic theory, sales of firms that were intensive in intangibles were hit less hard by the China shock, so intangibles served as a way to preserve market shares. In addition, and perhaps surprisingly, multinational firms operating in the most import-competitive sectors did not expand their network of subsidiaries in tax havens after the shock. One could have expected the reverse if intangibles were mainly used for tax reasons.

All in all, the results outlined in the paper cast light on the determinants of profit shifting and provide insights into the fall of the average effective tax rate observed in the last decades (Dyreng et al., 2017). More generally, they might help understand the recent backlash against globalization which notably gives, together with digitalization, tax loopholes, and mismatches between tax rules, the opportunity for some firms to separate the location of profits from that of real economic activities. The findings carry important policy implications as well. Because they reveal a close relationship between competition, trade, and corporate income taxes, they emphasize the need to connect international trade and tax policies at the international level.