The COVID-19 pandemic and associated global economic shutdown roiled financial markets around the world during the spring of 2020. The usually placid municipal securities market was not immune from this disruption. Initially, investors flocked to municipal securities to de-risk portfolios in response to the growing pandemic, pushing prices higher and bond yields to record lows. By early March 2020, however, investor sentiment had shifted, causing bond prices to fluctuate wildly, trading volumes to spike, and municipal bond indexes to tumble from highs recorded only a few weeks earlier. By mid-March, the sell-off in the municipal bond market was in full swing, resulting in a liquidity crisis in the municipal securities market.

In response to these developments, the Federal Reserve took a number of steps beginning in late March to calm the debt markets, including steps intended to alleviate pressure on the municipal securities market. While these efforts did have stabilizing effects, those municipal bonds thought to be vulnerable to pandemic-related economic effects still face financial headwinds.

For the first eight weeks of 2020, the municipal securities market looked to be in generally good shape. Worried about the growing pandemic and increasingly turbulent equity markets, investors looked to municipal securities and other fixed income investments as a safe haven. This pushed municipal bond prices up and yields down to record lows during the first three weeks of February 2020. The S&P Municipal Bond Index recorded a record high on February 19, 2020, and on February 24, 2020, the index reportedly logged its biggest one-day gain in twenty months.

Of course, not all municipal securities benefitted equally from this surge in demand. Even during the height of the rally, investors reportedly shied away from securities backed by issuers, projects, or market sectors (e.g., airports, hospitality, senior care facilities) thought to be vulnerable to the pandemic. Still, the municipal bond market remained strong overall through the end of February, as evidenced by the following chart prepared by Municipal Securities Rulemaking Board (MSRB) researchers: 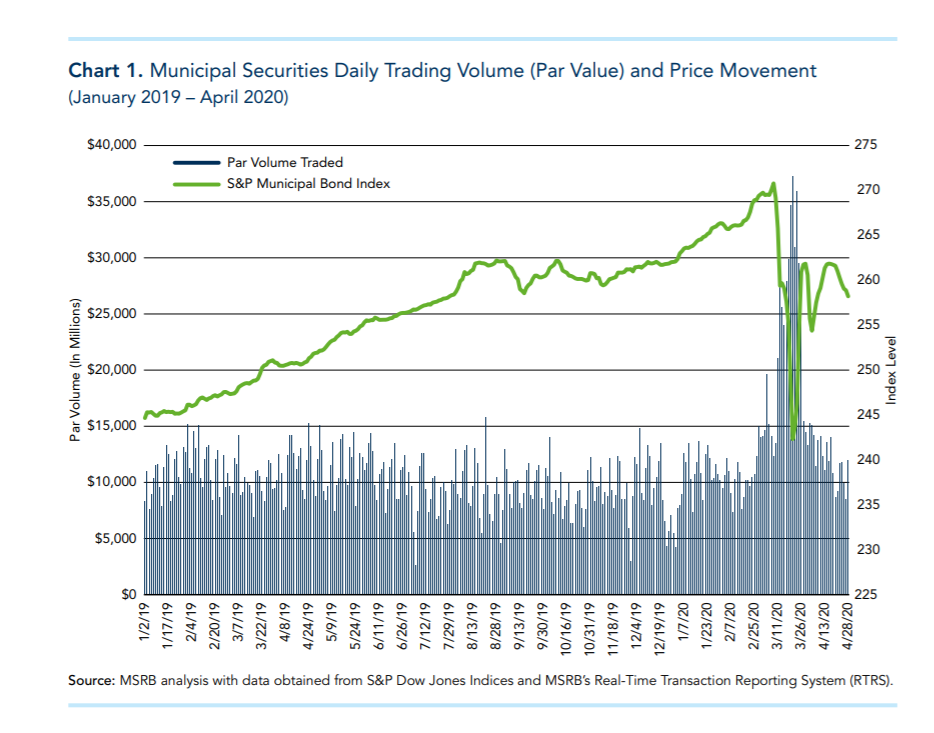 By early March, fears about the lasting economic and social impacts of the pandemic continued to grow and spread across the securities markets. Investors began to pull money from mutual and exchange traded municipal bond funds, especially high-yield funds. Bonds backed by vulnerable issuers and projects were hit as well. Prices began to fluctuate, trading volumes began to spike, and market indexes began to reverse course, as reflected by the above-referenced chart.

By mid-March, concerns about the impact of the coronavirus had triggered a full-on liquidity crisis in the municipal securities market. As worried investors sold off billions of dollars of holdings in mutual and exchange traded municipal bond funds, fund managers dumped the most liquid securities from portfolios to raise cash to cover investor redemptions.

Issuers of floating rate debt were particularly hard hit, causing yields to spike when interest rates were reset. According to data compiled by Bloomberg, for example, yield on debt issued by New York’s Metropolitan Transportation Authority “jumped” to 9% during the week of March 16 upon reset compared with 1% the week prior. High yield debt was hard hit as well. On March 13, for example, the Securities and Exchange Commission reportedly restricted short sales of the VanEck’s High-Yield Muni Exchange Traded Fund – the nation’s largest high-yield municipal bond ETF – after its price declined by 15% in one day.[1] Across the municipal securities market, daily trading volumes spiked and prices tumbled during this period.

By March 16, debt markets (including the municipal bond market) were under severe stress. On March 25, 2020, the yield on the one-month and three-month Treasury bills both turned negative, and the number of rating downgrades in the corporate debt market reportedly spiked as well.

Response by the Federal Reserve; Looking Ahead

In response to these developments, the Federal Reserve announced a number of measures designed to ease roiled markets, including initiatives that targeted or otherwise impacted the municipal securities market:

While the Fed’s efforts to reduce disruptions in credit markets helped to ease market turmoil, several challenges persist for those issuers thought to be exposed to significant coronavirus risk.

First, markets remained volatile even after the Fed began implementing its stimulus plan, and they remain volatile today. Volatility – together with liquidity issues and difficulties in asset pricing – has the potential to make borrowing more expensive and difficult for municipal issuers.[3] Second, issuers vulnerable to COVID-19 impacts continue to face challenges,[4] with higher-risk issuers being particularly hard hit (e.g., health care facilities, senior living facilities and communities, sports and entertainment facilities, charter schools, dormitories and other projects not backed by the taxing power of state or local government).[5] By way of example, a number of senior living center issuers reportedly defaulted or faced financial challenges caused by cost increases due to the pandemic. Factory closures and the loss of revenues in hard-hit market sectors (e.g., tourism) have also reportedly triggered defaults or reports of financial distress impacting loan repayment.

Third, the COVID-19 pandemic drove a sharp spike in transaction costs for municipal securities during the spring of 2020. Transaction costs are measured as a function of so-called effective spread (the difference between bid and ask price based on actual trade data). An increase in effective spread has the potential to increase borrowing costs for municipal issuers, since investors’ required rates of return reflect the costs of transacting in the municipal bond market. This spike in transaction costs wiped out the reduction in spreads that had been realized over the proceeding four-year period, according to analysis from the MSRB. And fourth, the pandemic resulted in a sharp uptick in COVID-19-related disclosures in both the primary offering disclosures and continuing disclosures, as shown below. 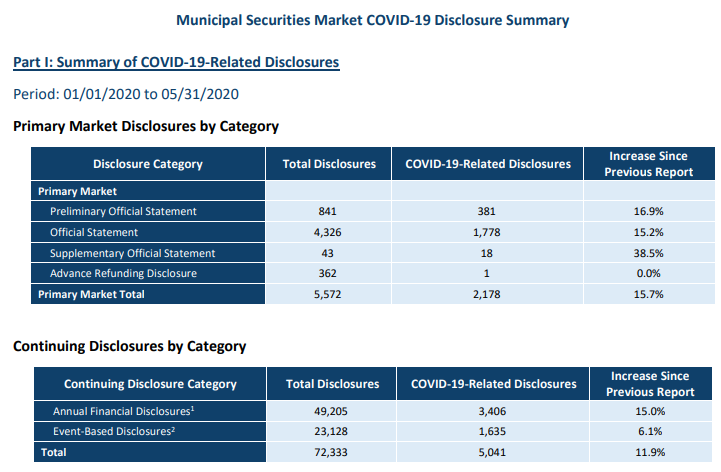 As of this writing, the liquidity crisis in the municipal bond market has eased. With borrowing costs lowering, debt sales by state and local governments increased markedly in June 2020 compared with March 2020. However, some issuers still face enormous budgetary and credit pressures due to pandemic-related costs, plummeting tax revenues, and other longstanding challenges to fiscal health. The road to recovery from the pandemic likely remains rocky for some municipal securities issuers, and markets are likely to remain volatile for the foreseeable future.

[3] Danielle Moran, Amanda Albright & Martin Z. Braun, Muni Market Rout Returns With Exodus Fueling Cash Strains, Bloomberg (April 1, 2020) (observing that municipal bond prices tumbled sharply despite the Fed’s stimulus plan announced the prior week, and noting that this drop “underscores the unprecedented volatility that has whipsawed the state and local government debt market for the past three weeks, when a record exodus from municipal bond mutual funds triggered rounds of forced selling by managers who needed to raise cash.”).

[4] Sam Goldfard & Anna Hirtenstein, Credit Markets Regain Footing – Fed’s Effort Begin to Reduce Disruptions in the Financial System; the Dow leaps 7.7%, Wall. St. J., (April 7, 2020) at A1 (observing that “[k]ey parts of the U.S. debt markets are functioning again, a sign that the Federal Reserve’s extraordinary steps are easing a credit-market crunch,” but noting that a series of rating downgrades – including S&P Global’s reset of its outlook to “negative” on all U.S. public-finance sectors – “reminded investors of many issuers’ vulnerability”).