At this time, numerous initiatives are attempting to provide citizens with a digital form of central bank money, referred to as Central Bank Digital Currency (CBDC). CBDC promises many benefits for citizens, such as providing a risk-free means of payment, preserving monetary sovereignty in light of the growing usage of private cryptocurrencies, and strengthening the transmission of monetary policy. The central banks of Sweden and China recently started the pilot phase of their CBDC prototypes and are expected to issue CBDC to the broad public in the near future. Furthermore, there are countries where some kind of CBDC is already issued with the help of e-money providers. In El Salvador, for example, providers have been issuing e-money to the broad public since 2015, which is fully backed by central bank money. A similar case can be found in China where e-money providers like Alibaba (Alipay) and Tencent (WeChat Pay) have been required to back their e-money with central bank money since spring 2019. In Lithuania, backing e-money with central bank money is voluntary but is still used in practice.

CBDC has also gained traction in national parliaments. In the Netherlands, the parliament voted unanimously for the implementation of a “safe deposit bank”, where citizens can safely keep their money – implementation has stalled for legal reasons.

Most countries distinguish among six legal forms of money: central bank deposits, cash, bank deposits, e-money, money market mutual fund shares (MMMF-shares), and virtual currencies. The central bank issues central bank money in the legal form of deposits and cash. Both constitute a liability of the central bank (and a claim of the owner). While deposits are only accessible by banks, cash can be used by everyone. Commercial banks issue money in the legal form of bank deposits, which are liabilities of the bank that are usually partially backed by central bank money. E-money is a liability of a non-bank electronic money provider (EMP) that is usually backed by bank deposits or government bonds. Some jurisdictions, however, also permit banks and even the central bank to issue e-money. MMMF-shares are liabilities of money market mutual funds, more specifically, they are equity which has money-like properties. They maintain a net asset value of one Dollar/Euro per share and are redeemable at any time from the issuer. Lastly, virtual currencies are used for payments but do not belong to any of the above-mentioned forms. Examples of virtual currencies include cryptocurrencies without a central issuer and digital vouchers, which are only accepted for payments by the issuer.

The Legal Form of CBDC

By definition, CBDC is “any electronic, fiat liability of a central bank that can be used to settle payments, or as a store of value”. Thus, it can be a central bank deposit, central bank-issued e-money, and even cash, if stored electronically. However, depending on the access option, CBDC can be a combination of central bank money and other types of money.

The user also has a claim at the central bank, but access is provided by PSPs on their own accounts. The PSPs would offer payment initiation services and account information services, which is in line with the Payment Service Directive 2 (PSD2) in the EU. Therefore, the user would have a legal relationship with the central bank and the PSP. The central bank would need to provide the PSPs access to its Application Programming Interface (API) so that the PSPs can perform their services. The legal form of CBDC in this access would not be different from direct access CBDC. Therefore, CBDC would be also a deposit, cash, or e-money.

In this access, the user again has a claim at the central bank, but access to CBDC is provided through TSPs on their own accounts. The TSP offers services on the storage and transfer of CBDC, which constitutes a contractual relationship between the user and the TSP. Additionally, the user still has a legal relationship with the central bank. This access option is especially relevant for Distributed Ledger Technology (DLT), since multiple TSPs may run a shared database with the same state, which enables competition among them. A central database can only be run by a single TSP, which creates no competition.

Figure 1 gives an overview of the legal classification of the different access options. 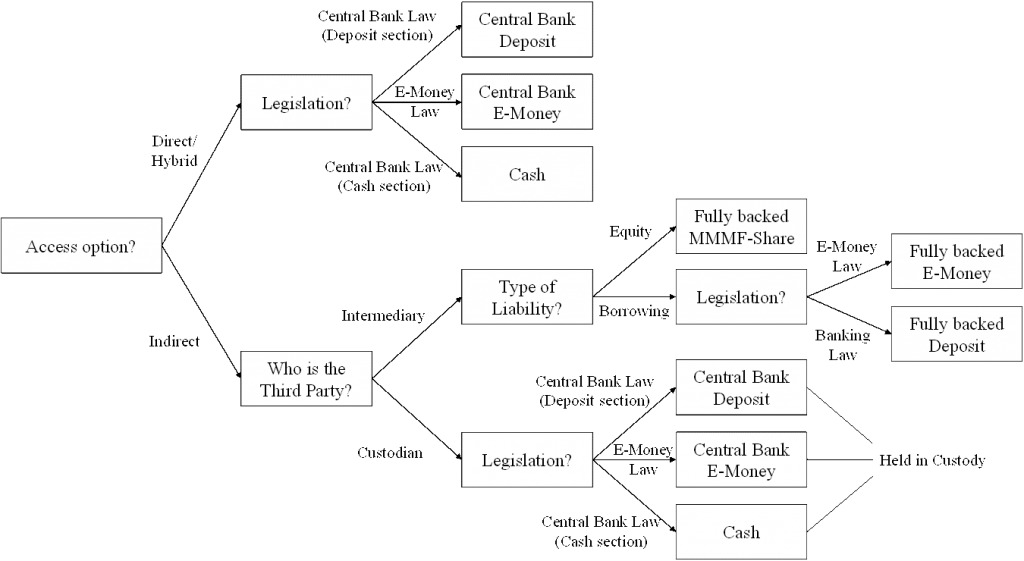 The legal forms of money alone are not sufficient to regulate CBDC. Regulatory rules will also depend on whether the central bank, and potentially involved third parties, are obligated to provide CBDC or provide it solely at their discretion. I identify the following three levels of obligation in my research:

Discretionary for the central bank and potentially involved third party

The first level of obligation with central bank deposits can be found in Germany, the EU, Japan, and Sweden. In Germany, central bank deposits can only be issued on the sufferance (non-objection) of the European Central Bank (ECB), while in the EU (ECB), Japan, and Sweden, these can only be issued in pursuance of monetary policy. In the EU, the national central banks (NCBs) are permitted to issue e-money with the permission of the ECB. In Uruguay, the central bank is permitted to issue CBDC in the legal form of digital cash. Other countries allow banks (Norway and the U.S.) and e-money provider (Colombia) to offer fully backed deposits. In Lithuania, Brazil, England, Switzerland, and Germany, e-money providers are permitted to invest in central bank money and offer fully backed e-money at the discretion of the central bank.

Discretionary for the third party

Mandatory for the central bank and potentially involved third party

Examples of the third level of obligation can be found in Ecuador and El Salvador.  In Ecuador, citizens had the right to participate in the e-money system of the central bank, which was active between 2014 and 2018. In El Salvador, e-money providers are required to offer fully backed e-money accounts to every requesting citizen.

Only with both of these components — the legal form and levels of obligation — can CBDC be regulated. Figure 2 gives an overview of how these regulatory options are implemented in various countries.

Figure 2 – Levels of obligation with examples

After identifying the various ways that CBDC can be regulated, my paper assesses how it should be regulated, in terms of the optimal level of obligation and the optimal access option. I do not assess the optimal legal form since this decision depends on the chosen access option and further design decisions, such as whether CBDC is interest-bearing or whether it is issued for monetary policy.

First, looking at the different levels of obligation from the consumer’s perspective, a right to CBDC, the third level of obligation, is the least discriminatory way of providing CBDC to citizens and therefore is the most favorable. This is the only option where CBDC is cash-like. In contrast, access to CBDC at the discretion of the central bank and third parties gives the authority to discriminate against citizens and should therefore not be considered. 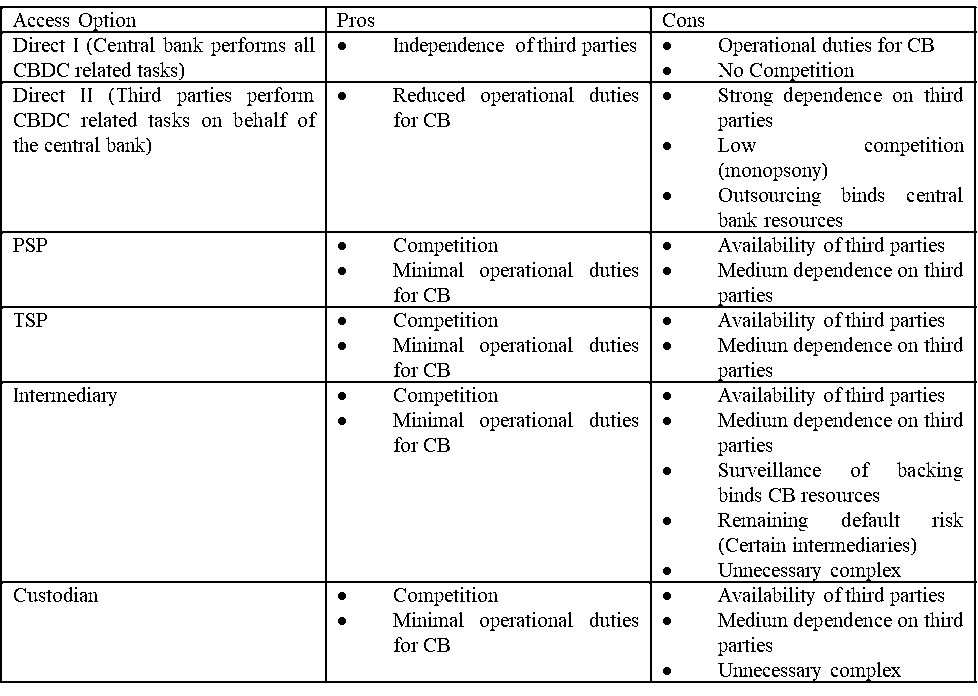 Hybrid access (through PSPs and TSPs) is favorable because it provides competition and minimizes operational duties for the central bank while not being as complex as intermediaries or custodians. Hybrid and indirect options have the risk that there are not enough third parties available. Apart from this, intermediaries have additional disadvantages. CBDC offered by intermediaries might bear a remaining default risk due to operational risk of the intermediary. If a bank or MMMF cannot cover its expenses and goes bankrupt, its user’s funds would be included in the bankruptcy estate. Moreover, intermediaries require monitoring of their backing, which binds central bank resources.

Central Bank Digital Currency is the next milestone in the evolution of money. Its legal implementation, however, needs thoughtful consideration of all possible regulatory options. My research shows that the regulation of CBDC encompasses two major components: the legal form of CBDC, and the levels of obligation, which indicate how binding the issuance of CBDC and the provision of access are for the central bank and potentially involved third parties. My research identifies certain regulatory options as more favorable than others. Only a right to CBDC for everyone is non-discriminatory, and therefore favorable from the consumers’ perspective. Furthermore, hybrid access may be a favorable trade-off between the pros and cons of all access options.

This research has implications for theory, practice, and policy. My framework provides a theoretical foundation for the legal assessment of CBDC. The levels of obligation can be considered as a design option for CBDC. The framework also helps central banks assess their legal authority for issuing CBDC. Finally, the framework helps policymakers consider the various objectives and tradeoffs involved in introducing and regulating CBDC.

Simon Hess is a Research Associate and PhD candidate at the University of Salzburg.

This post is adapted from his paper, “Regulating Central Bank Digital Currencies: Towards a Conceptual Framework,” available on SSRN.