According to the International Energy Agency (Chapter 6.2), roughly half of the investment in the power sector is undertaken by the private sector, which relies substantially on external finance, e.g. in form of loans. Particularly in developing and emerging economies, low-carbon or carbon free energy technologies are more expensive than fossil-based technologies, especially coal. Even in industrialized countries, market conditions are not sufficient to trigger such large investment flows to radically transform the energy system.

A key policy instrument is therefore to establish a price on carbon emissions to provide a price signal to reduce emissions at the lowest cost. This can be done via a tax on the carbon-content of fuels or via an emissions trading scheme. When firms form expectations about future carbon prices, they would invest more in low-carbon and zero-carbon technologies. When expected carbon prices are sufficiently high, global investment flows could approach the values needed to transform our economy in line with the ambition of the Paris Agreement of keeping warming “well below 2 degrees.”

Economists have pointed out that to this date, coverage of carbon pricing remains fragmented, with only 22% of global greenhouse gas emissions regulated by a carbon pricing regime. Moreover, existing carbon price levels – even if energy and excise taxes are accounted for – are far too low to be consistent with the ambition of keeping global mean temperature rise below 2 degrees: almost 90% of the fossil energy is taxed or priced at a carbon rate below $40 per ton of CO2. A larger assessment based on various model approaches suggests that prices of $40-80 in 2020, and $50-100 in 2030, are needed to limit temperature increases to 2 degrees.

In our recent working paper, we show that even universal carbon pricing at levels that limit warming to 2 degrees in Integrated Assessment, or CGE models, might not guarantee the temperature goal in reality. The fundamental reason for this is that all existing models disregard the role of financial intermediation costs. As argued above, investment flows are enormous, so frictions in capital markets could play a decisive role for the success or failure of carbon pricing – and climate policy in general. This concern is supported by the empirical evidence on interest rate mark-ups of up to 40 percentage points (compared to the world average of 7.7 percentage points) and evidence on its effect on the costs of investments.

For our analyses, we extend a well-established dynamic equilibrium growth model with a multi-sector energy module by a financial intermediation sector. Banks collect savings from households and lend capital to firms. The loan rate and the deposit rate differs for two reasons: first, there are intermediation costs and second, monopolistic competition in the banking sector creates additional mark-ups.

We analytically derive various channels of how the banking spread affects the economy and carbon emissions. These can be grouped into two broad categories: macroeconomic effects (overall economic growth and energy demand) and sectoral re-allocation effects (see Table 1). The macro-economic impacts of the spread between the deposit rate and the loan rate tend to reduce carbon emissions because reduced saving, capital, and energy demand lower economic activity and energy use, thus leading to lower carbon emissions. Within the energy sector, however, interest rate spreads can have very different implications. In particular, the portfolio effect in the energy sector plays a prominent role: interest rate spreads shift the energy mix to the less capital-intensive technology. High loan rates translate to high costs of capital, which will register as an increased price for anything that is produced using at least some capital. But while the effect is dominant for examples of renewable energy, where capital cost make up the lion share of total costs, the effect is much less pronounced when other inputs are decisive for the overall costs. Compared to coal or natural gas power plants, wind and solar energy have more than twice the capital costs per Joule of energy produced. Hence, operating expenditures including fuel cost, dominate the costs of fossil energy production. The share of operating costs increases further when carbon pricing raises the cost of burning fossil fuels. But interest rate spreads also increase the costs in extractive industries and lead to a slower extraction path due to changed discounting.

We then employ our numerical model calibrated to the global economy, first assuming no interest rate spreads. We set an upper bound on cumulative carbon emissions that is consistent with the two degree target. As part of an optimization procedure, the model determined the optimal carbon price to achieve this target over the 21st century at lowest discounted welfare losses. This carbon price can be considered as the price recommended by an integrated assessment, or CGE model, that disregards financial frictions. We then hold the carbon price fixed and increase the interest rate spread through an increase in intermediation costs. 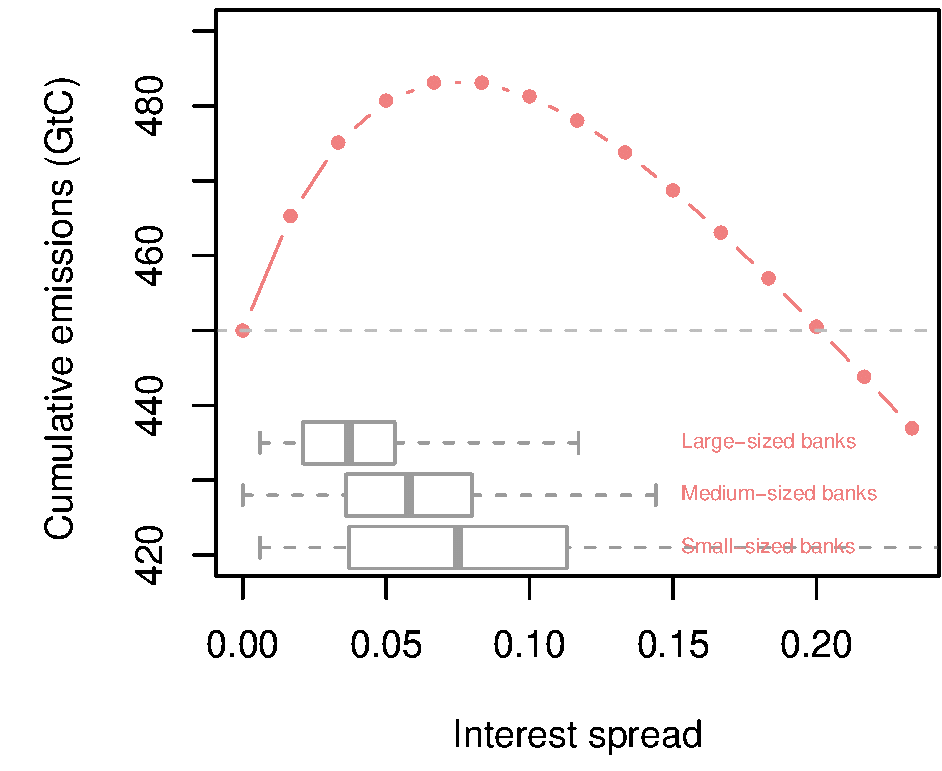 How can governments respond to this problem? An ideal measure would be to target directly the interest rate spreads and reduce them: high interest rate spreads can indicate financial frictions such as information asymmetries that make it difficult for banks to assess credit risk. High interest rate spreads may also be driven by other market failures such as concentration in the banking sector giving rise to excessive margins. Regulation could aim to lower information costs or encourage competition in the financial sector. When intermediation costs arise from functions and services of intermediation, for example screening and monitoring of debtors, or management of risk and portfolios, intermediation costs reflect real costs and the margin earned by the intermediator is a fair compensation. When more narrowly focusing on climate policy and the aim to keep cumulative emissions below a policy target, carbon prices need to adjust to reflect the distortion in the financial market. We can use our model to calculate required increases in carbon prices compared to the situation without interest rate spreads to still achieve the 2-degree-target. As Fig. 2 emphasizes, on average a moderate increase of about 10 percent is sufficient. But the required carbon price may be substantially higher during peak periods (for example in early periods), where a mark-up of up to 35% compared to the price in the frictionless model is required. 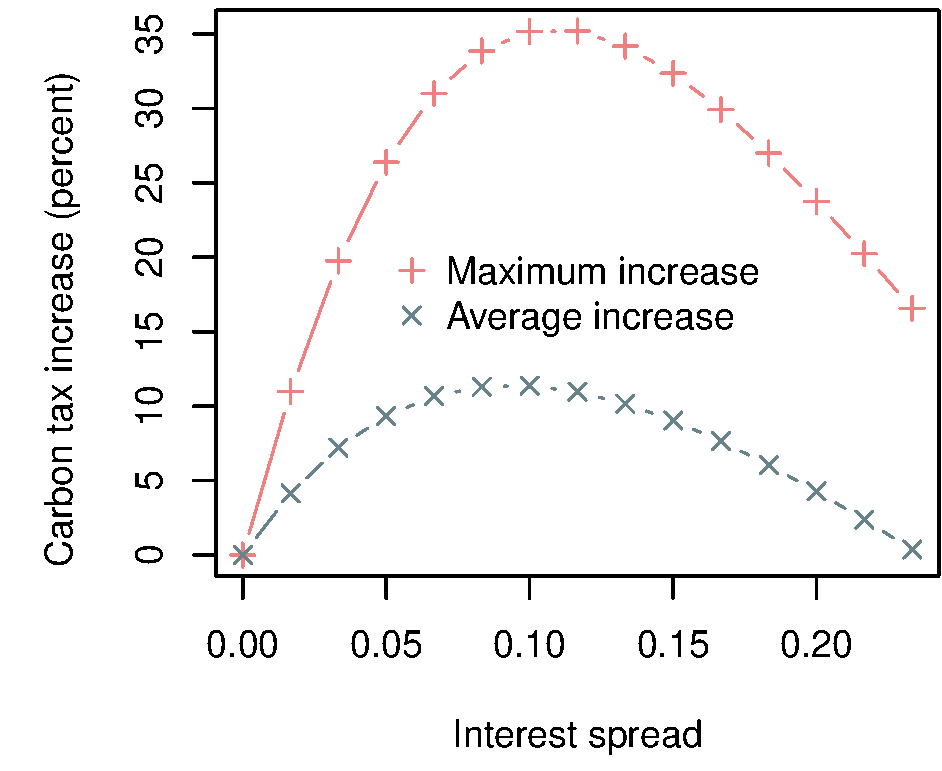 The transition to a low-carbon economy requires substantial investments, not least from the private sector. The financial sector has an important role to play in channeling private finance and reducing the costs of financial intermediation to a minimum. But remaining intermediation costs and financial frictions still distort price signals throughout the economy compared to what one would expect from the frictionless perspective of many economic models. Our analysis shows that the assessment of carbon pricing is sensitive to costly financial intermediation. Whether the effect of interest rate spreads support climate policy by reducing emissions or whether interest rate spreads dilute the impact of carbon pricing by tilting the energy portfolio towards fossil fuel combustion is not clear a-priori. Our modeling suggests that the latter effect may dominate for the relevant magnitudes of interest spreads, such that climate policy goals are overshot when intermediation costs are ignored. More stringent carbon pricing is one way to take such financial frictions into account. Technology policies, for example subsidies on low-carbon energy technologies or capital market instruments that incentivize low-carbon investment, may provide a more direct way to address the unveiled issue. It is an interesting question for further research to provide guidance on the optimal portfolio of policy instruments.

Kai Lessmann is head of the research group ‘FutureLab Public Economics and Climate Finance” at the Potsdam Institute for Climate Impact Research (PIK).

This post is adapted from the paper, “Climate Finance Intermediation: Interest Spread Effects in a Climate Policy Model,” available here.