As a consequence of the global financial crisis and the European sovereign debt crisis, risk-free nominal interest rates have plummeted – in some countries, they even turned negative. These interest rate decreases lead to a systematically higher risk appetite by institutional investors, such as banks and insurers. The institutional environment, and the (implicit) minimum return requirement of the respective lenders, have been identified as the main drivers of this behavior. But how do negative nominal interest rates influence the decision-making behavior of private investors?

According to classic economic theory, investors should consider real (inflation-adjusted) interest rates in their decisions. These, however, have already been negative for several years in many countries. We are therefore interested in whether lowering the nominal savings rate below 0% still has an additional effect on private investors. To answer this question, we conduct an experimental study that involves 347 participants at the University of Münster. It shows how the risk appetite of individuals is influenced by a reduction in interest rates, in particular, by a reduction below 0%.

Classical portfolio theory predicts that interest rate changes do not have a substantial impact on investors’ risk appetite as long as the market’s risk premium remains unchanged. However, earlier empirical evidence shows that private investors often do not act in line with normative benchmarks such as expected utility theory. Thus, alternative decision-making models have been developed. These models consider the fact that individuals often evaluate alternatives dependent on a reference point. In line with this, an outcome is usually evaluated positively as long as it is slightly above the reference point. In contrast, an outcome is evaluated negatively if it is only slightly below the reference point. Therefore, a change in interest rates below the natural reference point of 0% may have a strong impact on actual investor behavior.

Figure 1: Presentation format of the risk-free and risky asset (translated from German). 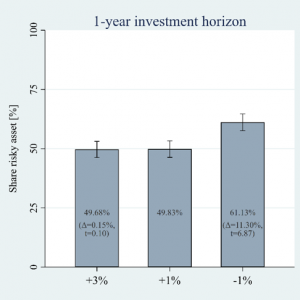 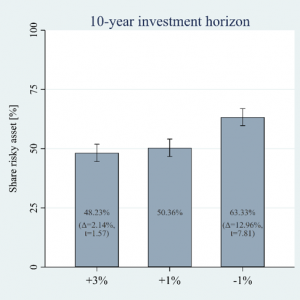 Figure 2: Average investments to the risky asset in the three interest rate scenarios for the 1-year investment horizon (left panel) and the 10-year investment horizon (right panel). The error bars indicate 95% confidence intervals. The numbers within the bars indicate average investments in the respective scenario, together with the difference (Δ) compared to the +1% interest rate scenario and the corresponding t-statistic. The t-statistics are based on paired sample t-tests.

The documented patterns cannot be explained by classical risk aversion. Neither a negative relation between interest rate level and risk appetite in general, nor the systematic change in investor behavior around an interest rate level of 0% are in line with standard portfolio theory. Further control questions in the course of the experiment show that the effects do indeed not depend on the participant’s level of risk aversion, but rather on their attitude towards losses. More specifically, the results in Figure 2 are strongly driven by participants who state that it is important for them to avoid losses when making investment decisions. Therefore, investment decisions are not simply determined by a classical risk-return-tradeoff. They are also strongly influenced by the investor’s desire to reduce the probability of incurring a nominal loss.

From an academic perspective, our results underline the need to add reference point components to classical models in order to adequately describe the behavior of market participants. From a practical perspective, a fundamental aversion towards volatile investments is often held responsible for comparatively low equity investments of private investors despite a comparably high equity risk premium. This “Safety First Investment Rule” however, seems to be partially abandoned if the safe alternative yields a certain loss. As a result, the demand for risky asset classes might substantially increase in negative interest rate environments. In addition, banks should take into consideration that lowering deposit rates below the 0% threshold might be difficult to enforce, because investors appear to be particularly sensitive towards interest rate changes around 0%. Nevertheless, market-wide negative interest rates could ultimately boost the securities business of banks.