In 2018, the Bank for International Settlements conducted a survey to which 63 central banks responded. According to the results, 70% of the central banks were then (or planned to be soon) engaged in central bank digital currency (CBDC) work. However, only three central banks reported that they were likely to issue a CBDC within the next six years. Why would a central bank issue a CBDC? How would it work? And what may be the intended, and perhaps unintended, consequences? This post, which summarizes my recent paper, attempts to answer these questions.

Issuing a CBDC would be the only way to allow the circulation of central bank money on a blockchain and would provide a perfectly safe and liquid payment instrument. As a result, recourse to the blockchain would become more attractive to financial institutions.

Promoting financial innovation and lowering transactions costs through the use of blockchain could be motives for issuing a W-CBDC. Because the underlying technology (the Distributed Ledger Technology – DLT) is relatively low-cost, the issuance of a CBDC may also improve the contestability of the payments industry by supporting competition through the entry of new providers.

Holding digitalized central bank reserves is presently open to select financial institutions (mainly banks). Furthermore, bank deposits, which are also digitalized, exhibit residual liquidity and credit risks in spite of being insured. Finally, fiat currency, which is accessible to the general public, is not digitalized. Issuing a R-CBDC would fill a gap in the supply of liquid financial assets and break the current incompatibility triangle between universal access, security, and digitalization of liquid financial assets (see Chart below). R-CBDC would also allow central banks to keep a direct relationship with the public in countries where, as in Sweden, the demand for fiat money is decreasing sharply. 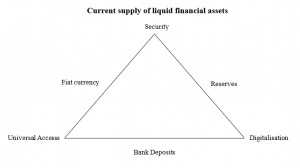 Issuing a R-CBDC could also contribute to reducing the social costs of retail payment services. These costs are estimated at close to 1% of GDP in the Euro area, half of which correspond to the costs of payments in cash. Moreover, issuing a R-CBDC should support financial inclusion, notably in emerging countries, where the banking system is often loosely present, less efficient, or considered untrustworthy. Furthermore, public authorities in emerging countries might be concerned that stablecoins, such as Libra, will replace the sovereign currency. Finally, in a growing digitalized retail payments system, R-CBDC could help maintain the level of the monetary base, thereby preserving seigniorage and the independence of the central bank in the longer run.

Characteristics of a CBDC

The first common characteristic of a CBDC would be that only the central bank can create or destroy it. Second, in order not to break the uniformity of the payment system, the central bank would issue and exchange at par with the other forms of central bank money (banknotes and reserves). This would ensure the fungibility of the monetary base; and by implication, the CBDC’s supply should be perfectly elastic. It could be difficult to impose constraints on the levels of holdings or to set conversion fees, as such frictions might lead to a breaking of parity between the CBDC and the other forms of central bank money, in particular when the demand for central bank money is high (e.g., bank runs, financial crises). Like banknotes and electronic money, but unlike reserves, it should be possible to transact in the CBDC on a 24/7/365 and peer-to-peer basis.

As mentioned above, only financial institutions would be entitled to hold a W-CBDC. In order to avoid uncontrolled dissemination of the W-CBDC (which might result in it being used in illicit transactions), and preserve the confidentiality of transactions, W-CBDC would need to be issued on a permissioned blockchain. Only financial institutions and the central bank would have access to this blockchain. And unlike reserves, W-CBDC would circulate outside of the central bank books, while remaining traceable by the central bank through the distributed ledger.

As reserves are remunerated, it seems unavoidable to also remunerate the W-CBDC, in order to keep reserves and the W-CBDC at par.

Central banks currently open accounts only to resident institutions (having a branch is sufficient in many countries). Allowing non-resident financial institutions to participate in the blockchain accepting the W-CBDC would create an unprecedented situation. It would also imply a high degree of international coordination and represent an important step in the internationalization of the currency, via its use on financial markets. This would be especially true for the first W-CBDC-issued reserve currency. However, a possible drawback could be greater instability in the demand for central bank money.

R-CBDC would likely be open to both residents and non-reisdents. Indeed, it would be difficult to prohibit non-residents from holding a R-CBDC since, in many countries, they can already hold cash and bank deposits in various currencies.

Issuing a monetary asset directly to the public would require fulfilling regulatory requirements, specifically: know-your-customer, anti-money laundering, and combating the financing of terrorism obligations. However, most central banks lack direct experience in managing individuals’ accounts and would like to avoid the reputational risk of a R-CBDC being used in fraudulent transactions. Thus, the distribution of a R-CBDC would likely be intermediated. Moreover, there would, a priori, be little interest in having users validate transactions. Accordingly, a R-CBDC is not likely to be issued on a blockchain, or at least it would not be on a public one.[1]

A distinction can be drawn between the consequences for (1) the economy and the financial system, (2) monetary policy, and (3) financial stability.

By increasing competition and generating productivity gains, both in payment services and beyond (financial services, retail industry, etc.), the issuance of a CBDC would represent a supply shock that would support economic growth. Moreover, the issuance of a R-CBDC would support demand by making it possible to carry out transactions that do not currently take place due to monetary and non-monetary costs, as well as security and privacy concerns.

At the international level, the issuance of a CBDC could exert a disciplining effect on the monetary policies of certain, irresponsible, countries. Furthermore, if financial assets are issued in CBDC and international investors favor them in their asset allocation, this could result in higher exchange rate volatility, particularly in times of stress.

Regarding the financial consequences of the two sorts of CBDC:

The main objective of monetary policy is price stability. Starting from a situation in which inflation would be below target, it could transitorily be more difficult to achieve this final objective as a result of the positive supply shock following the issuance of a CBDC, unless the demand shock created by R-CBDC issuance is large enough to offset the disinflationary impact of the supply shock. The consequences for the implementation of monetary policy and for its transmission mechanisms would be more important, and perhaps, permanent.

An important issue for monetary policy implementation relates to the CBDC rate of interest. As the CBDC would be a part of the monetary base, its remuneration should be compared to those of the other components: banknotes, which are not remunerated, and reserves which, in the Eurosystem, are remunerated at the policy rate—the main refinancing operations rate—for required reserves, and the deposit facility rate for excess reserves.[2] For the W-CBDC, the simplest solution would be to remunerate it as reserves and let banks use W-CBDC to fulfill their reserve requirements. Regarding the R-CBDC, a rate below the one on excess reserves could be applied, in order to take both the convenience yield of holding it into account (the same reason that cash is not remunerated), and dissuade institutions from holding the R-CBDC, thus keeping it for public use.

Whether the R-CBDC is remunerated or not, would affect monetatry policy transmission mechanism:

Concerns have been voiced that R-CBDC issuance may facilitate bank runs and exacerbate liquidity strains. However, having the central bank as the most important depositor, through its refinancing of banks, should reassure the public. Indeed, the central bank is unlikely to withdraw its deposits precipitously since it faces no liquidity constraint. Furthermore, the risk of bank runs taking place just on the basis of rumors should diminish, since the central bank can be expected to have better access to information than the public.

Moreover, the main motivation for supplying a CBDC—allowing all economic agents to have a perfectly safe digitalized means of payment at their disposal, and thereby preserving economic activity in all circumstances—would be at play in times of runs or crises. Even if runs became more frequent, their negative consequences for the economy should thus be lessened.

Issuing a CBDC could be beneficial to the economy. However, it would raise some rather thorny issues, notably, the respective roles of the central bank and the private sector in the supply of money. This would particularly be the case for a R-CBDC, while a W-CBDC might meet the expectations of strongly internationalized financial institutions. Moreover, when interest rates are positive, an interest bearing R-CBDC could create a trade-off between the effectiveness of monetary policy and the cost of bank intermediation. Therefore, the choice may be between not issuing a CBDC and issuing only W-CBDC. In countries where the dwindling use of cash would lead to the demand for a public digital means of settlement, or financial inclusion is low, issuing a R-CBDC would also be a possibility.

[1] However, the use of a permissioned blockchain, in which only the central bank and/or the banks and payment services providers could validate transactions, could be of interest, with a view to integrating smart contracts, notably for the payment of interest if the R-CBDC were remunerated.

[2] Since 2008, the Fed has also been able to remunerate reserves at two different rates but has constantly set them at the same level.