The Global Financial Crisis led economists and regulators to refocus on the relationship between household leverage and macroeconomic performance. The ensuing debate has revolved around how best to contain household debt using a variety of approaches, with much emphasis being placed on loan-to-value (LTV) caps, i.e. limits on borrowing beyond a certain fraction of the value of the assets to be purchased with the loan (Claessens, Gosh, and Mihet (2013)). LTV caps typically target loans from traditional financial intermediaries, such as banks. That, however, might be too narrow if households have access to alternative, lightly regulated, credit channels. In our paper, we study one such channel – online marketplace credit.

Rivaling traditional consumer lending in size and reach (Morse (2015)), marketplace credit has experienced double-digit growth in developed economies such as the U.S., where loan volumes amounted to $77 billion in 2015.[1] While this growth is impressive, China remains the largest market for marketplace lending (Deer, Mi, and Yuxin (2015)), with volumes totaling over $116 billion (RMB 789bn) as of December 2018; corresponding to roughly 20% of household consumption loans provided by traditional banks.[2]

A marketplace credit company acts as a “broker,” offering an online platform that brings together prospective borrowers and lenders. To see how marketplace credit can act as a channel to elude LTV caps, suppose a borrower intends to take out a mortgage with a bank to purchase a house worth $100. Suppose further that there is a 50% LTV cap on the mortgage, and that the borrower can only commit $40 as a down payment. Other things equal, the LTV cap prevents the mortgage from being made. If, however, the borrower can obtain an additional credit of $10 on a marketplace lending platform (or if marketplace credit helps her free up funds which can then be added to her down payment), the bank can issue the mortgage and the LTV cap is circumvented.

Two features of marketplace credit make it especially conducive to this sort of regulatory arbitrage. First, it provides borrowers with a degree of anonymity since platforms typically impose much more modest disclosure requirements, and receive much less regulatory scrutiny, in comparison to banks and traditional financial intermediaries. In that respect, marketplace credit is similar to other non-bank sources of credit, such as family and friends and payday lenders. Second, unlike those other sources, marketplace credit provides access to an unprecedent large funding pool (there are thousands of marketplace lenders in China). Building on these ideas, we assess to what extent marketplace credit poses a vulnerability to LTV-based policies and contributes to fueling household debt creation.

Our results are consistent with marketplace lending providing an unregulated source of credit with the potential to undermine LTV caps. Our baseline effects are described in Figure 1 below, which plots loan applications at RenrenDai for “treated” cites (where down-payment requirements increase) and “control” cities (where down-payment requirements do not increase), around the last quarter of 2013. The lines corresponding to treated and control cities closely overlap over the entire two-year period preceding the regulatory change. Following the last quarter of 2013 however, loan applications in the treated cities sharply increase relative to the control cities, consistent with an influx of applications to help meet the higher down payments. While applications grow in both groups – due to the development of marketplace credit in China during our sample period – in the first six months of 2014, applications in the treated cities grow by 50%, as opposed to only 16% in the control cities, consistent with marketplace credit being instrumental to circumventing the regulatory LTV cap.

Our estimates imply that the increase in marketplace loans accounts for approximately 70% of the rise in down payment requirements in the larger “Tier 1” cities like Beijing and Shanghai, and about 50% in “Tier 2” cities like Changsha and Wuhan. Given that RenrenDai, though an important market player, is but one of a large number of marketplace lending platforms active in China, and that borrowers may be able to obtain credit on multiple platforms at the same time (Aggarwal and Stein (2016)), these estimates provide a lower bound on the importance of marketplace lending as a channel to circumvent regulatory LTV caps. Consistent with this view, to the extent that the goal of the regulator was to reduce house-price levels, or at least slow their rise, the regulatory intervention itself appears ineffective – house price growth in the treated cities does not slow down relative to the control cities after November 2013.

Our results also suggest that marketplace lenders fail to adjust their screening and loan pricing decisions in the face of the influx of borrowers seeking to circumvent down payment requirements. We find little evidence of changes in the credit scores and rates of on-site verification for borrowers who obtain a loan after the 2013 episode. In contrast, tighter screening on part of the lenders would predict ex-post higher credit scores and higher rates of on-site verification. In addition, we do not detect any significant changes in loan yields or maturities, despite the fact that default rates increased by about 30% relative to their pre-2013 levels. These results suggest that lenders on the RenrenDai platform have an “inflexible” lending technology, which does not allow them to adjust their lending decisions, even though they are making loans that turn out to be riskier.

We validate this analysis studying a symmetric change in LTV caps, which took place in September 2015. Starting that month, all city governments in China, with the exceptions of Beijing, Guangzhou, Sanya, Shanghai, and Shenzhen, imposed a 16.7% reduction in minimum down-payment requirements for first home purchases (from 30% to 25% of the property’s value). In this case, the demand for marketplace lending in the treated cities decreased relative to the controls, reversing the effects observed around the 2013 episode.

There are two main takeaways from our findings. First, they speak to the possibility that FinTech acts as a vehicle for regulatory arbitrage. Interestingly, a large part of the literature has focused on the evasion of regulatory constraints by financial intermediaries such as banks or other lenders, i.e. on the side of credit supply (Adrian and Ashcraft (2012), Buchak et al. (2018), Plantin (2014)). Our results point to the fact that regulatory arbitrage on the side of credit demand (enabled or facilitated by the presence of the more lightly regulated marketplace lending channel) is also economically relevant.

Second, our tests relate to the ongoing debate around the systemic impact of household leverage and on the design of policies to contain it. Much of the literature has focused on U.S. data, and two views prevail. One view focuses on credit supply, and blames financial innovation and incentives in the financial sector for the buildup of mortgage debt leading up to the 2007-2009 crisis (Mian and Sufi (2009), Claessens et al. (2010)). A second view focuses on credit demand, on the grounds that household leverage growth encompassed not only lower-income borrowers, but also the middle-class ((Adelino, Schoar, and Severino (2016), Foote, Gerardi, and Willen (2012), Foote, Loewenstein, and Willen (2016), alme, De Giorgi, and Nosal (2017)). Our findings present fresh evidence from a different context – China – and time period – 2010-2017 – and highlight the role of both credit demand (to meet the down-payment requirements) and credit supply (from marketplace lending). They also point to a vulnerability of LTV caps, a central instrument in the macroprudential toolkit (Allen and Carletti (2011), Crowe et al. (2011), Claessens, Gosh, and Mihet (2013), Jácome and Mitra (2015)). One potential solution is to monitor indicators other than LTV (for example, debt-to-income ratios), as well as the borrowers’ overall indebtedness. However, this risks throwing the baby out with the bathwater and losing the flexibility that makes marketplace credit a viable business in the first place. 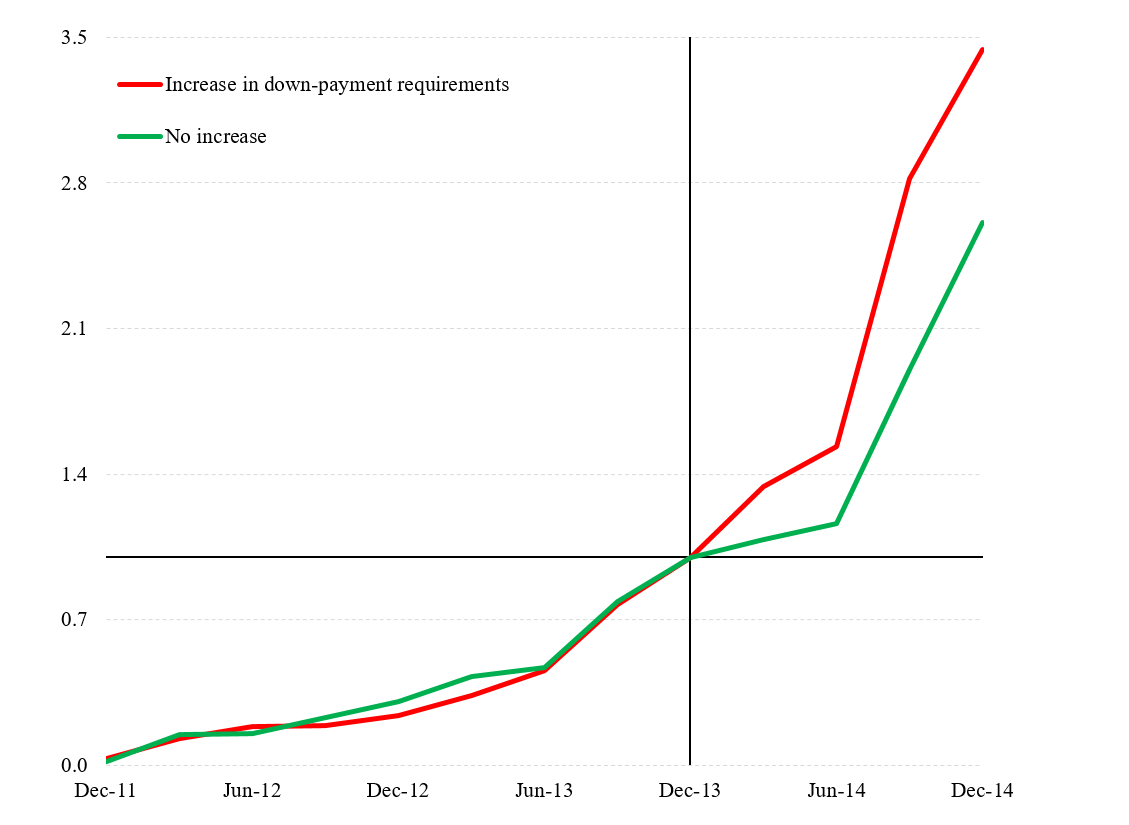 Adrian, T., and A. B. Ashcraft. 2012. Shadow Banking: A Review of the Literature. Federal Reserve Bank of New York Staff Report 580.

Adelino, M., A. Schoar, and F. Severino. 2016. Loan Origination and Defaults in the Mortgage Crisis: The Role of the Middle Class. Review of Financial Studies, forthcoming.

Allen, F., and E. Carletti. 2011. What Should Central Banks Do About Real Estate Prices? Working paper, University of Pennsylvania and European University Institute.

Morse, A. 2015. Peer-to-peer crowdfunding: Information and the Potential for Disruption in Consumer Lending. Annual Review of Financial Economics 7, 463-482.