A Typology for Diagnosing and Remedying Regulatory Capture in Financial Regulation

The study of regulatory capture has a long history across various disciplines. Yet, scholars still disagree on its definition and pervasiveness. This post proposes a typology for organizing literature on regulatory capture under a few key dimensions to help scholars and practitioners better diagnose capture and choose appropriately tailored policy responses. The typology is then applied to 2008 crisis-era financial regulation in the US to illustrate its utility.[1]

Despite a lack of scholarly agreement in defining capture, two common themes run through previous definitions: that the key actors are regulators and regulated industries, and that regulators who fail to uphold the public interest do so after successful pressure from business interests. For the purposes of this post, capture is defined as regulators consistently favoring the preferred policies of targets of regulation, resulting from an exercise of power by the regulated industry. Using these insights, the capture typology in Table 1 is organized along two dimensions: the degree of coordination within the regulated industry, the agents of capture; and the scope of capture within the agency and/or elected officials, the targets of capture. Agents of capture progress from uncoordinated to competing to well-coordinated in their efforts to pressure targets. This dimension indicates the necessary level of coordination to employ a capture mechanism rather than actual industry structure or level of industry concentration. The vertical dimension has two primary targets of capture: the agency and its personnel; and elected officials, like the president and Congress. While an entire agency can be captured, within the agency, low-level operators, regional managers, or appointed executives can be captured as well. Moving from agency personnel, to the agency, to elected officials represents a qualitative progression in the scope and power of actors being captured. 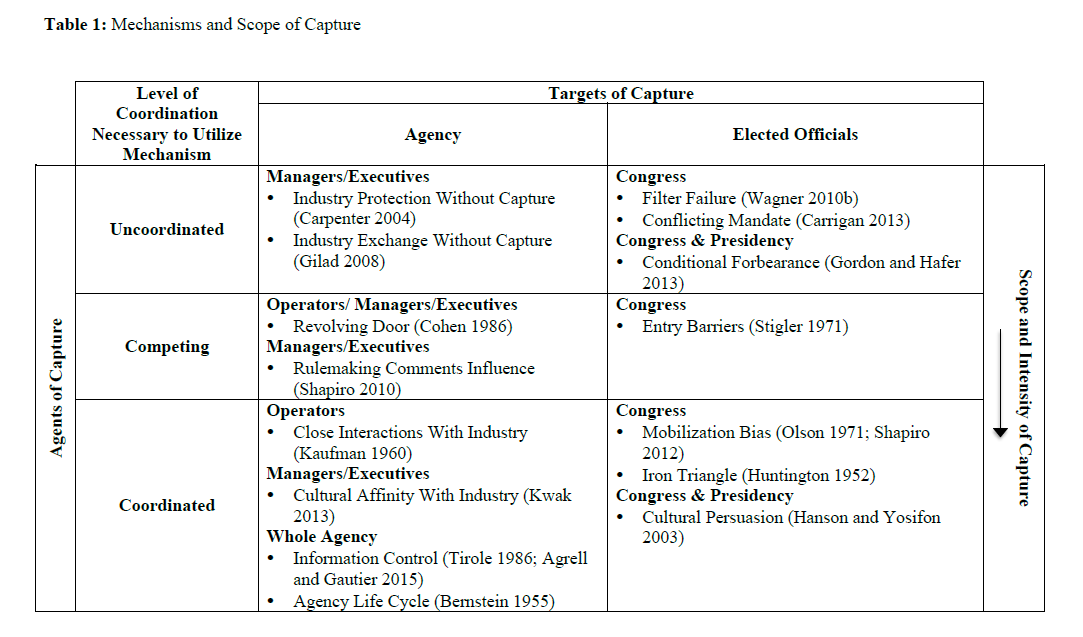 There are a few important takeaways from the typology. First, when agents of capture are uncoordinated and/or not directly pressuring a regulator, they may receive regulatory benefits that are observationally equivalent to capture, without the regulator actually being captured. For example, what appears to be a captured regulator could be an agency shifting its enforcement stringency with the preferences of changing presidential administrations and public preferences. Second, the scope and intensity of capture increases as one moves from left to right and from top to bottom. For example, the revolving door (in which individuals move between industry and government and push industry-friendly policy) may target front line agency examiners and/or appointed leadership, while others, like information control, impact the agency as a whole.

Recognizing that not all forms of capture are created equal, and that the scope of capture varies across the regulatory space, is important for designing appropriately targeted remedies, as illustrated in Table 2. For example, when front line agency personnel are growing too close to the regulated industry or spinning through the revolving door by seeking industry employment, narrowly targeted reforms like rotating personnel between geographic locations every few years may be enough to keep regulators independent, rather than broader reforms like closing an agency. Reforms also vary depending on the target of capture; agency capture needs agency-specific reforms like more consumer participation in decision making, whereas elected official capture requires broader solutions like electing new leadership or campaign finance reform. Lastly, it is worth noting that most reforms focus on reforming government while ignoring industry. However, industry reforms can also combat capture. For example, antitrust enforcement has economic impacts on competition, prices, and consumer welfare, but also political effects by reducing a firm’s power to influence regulators.[2] Alternatively, subsidies to clean energy firms can counteract the influence of traditionally less environmentally friendly energy producers.[3] 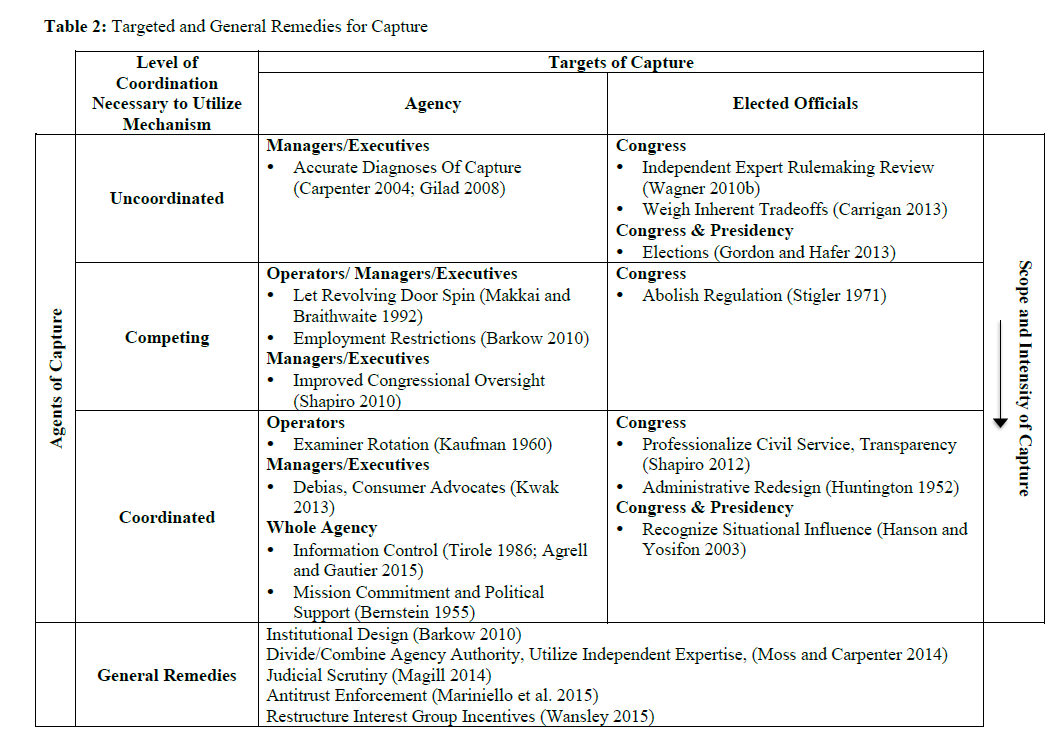 How does the above help us make sense of capture in financial regulation? And what policy responses does it suggest? First, to what extent were elected officials captured? Though the classic form of capture sees industry pushing for entry barriers to reduce competition,[4] scholars also recognize that deregulation is a form of corrosive capture that reduces or eliminates publicly interested oversight of market actors.[5] Since the 1980s, both political parties consistently pushed for financial deregulation to the point that, by 2009, the US had its highest level of financial deregulation in the previous century.[6] The industry pushed deregulation through lobbying and campaign donations and was able to push the Democratic Party to embrace deregulation along with Republicans, as the Democrats sought to make up for funding disadvantages due to the decline of organized labor.[7] One may counter that these decisions are instead “electorally sanctioned pro-business regulation”,[8] meaning voters supported deregulation and voted for politicians whom agreed. However, public support for business regulation did not consistently align with policy shifts, suggesting elected officials lost sight of the public’s interests.

Evidence suggests particular financial regulators were captured as well. All four federal bank regulators were lax in protecting consumers from abusive lending practices, compared to state attorneys general, who were much more aggressive.[9] The agencies also failed to rein in bank risk taking. A review of 50 Inspector General autopsy reports for large bank failures between 2007 and 2009 found that supervision across agencies was “almost universally lax”, despite the fact regulators had all the necessary tools to curb the practices that led to the crisis.[10]

The Office of Thrift Supervision was particularly conciliatory to the industry. The OTS oversaw some of the largest bank failures and bailout recipients at institutions like IndyMac, Washington Mutual, and AIG. It allowed regulated banks to conduct their own evaluations of their compliance with consumer protection laws.[11] It also preempted state consumer protection laws with lower federal standards; resulting loan default rates at federal thrifts regulated exclusively by the OTS were two to three times higher than for state thrifts, which were subject to state regulation as well.[12] More egregiously, it encouraged thrifts to illegally backdate capital infusions to avoid deposit taking restrictions.[13]

Yet the capture critique should not be pushed too far, given that some of the OTS’ behavior can be explained by industry influence without capture. The bank regulatory structure was created piecemeal over time and was not the result of rational planning. Rather, Congress created new banking regulators over many decades in response to economic crises and public needs. This system allows banks to choose their regulator by changing their charter, permitting them to move across the regulatory space in search of lax regulation. Further, some agencies are funded exclusively by fees charged to regulated institutions. This system encourages a race to the bottom that puts pressure on all four regulators to cater to industry interests, though the system itself is the product of historical accident rather than capture. Ultimately then, this analysis suggests financial regulation can be explained by various forms of capture and non-capture mechanisms.

What does the above suggest for regulatory reforms? Dodd-Frank addressed some problems by creating the Consumer Financial Protection Bureau to give consumers a stronger advocate than the banking regulators. Closing the OTS was a second major reform of Dodd-Frank, though the scope of capture at the OTS suggests this may have been an overreaction. Many of the OTS’ largest bank failures came in its western region, overseen by a senior manager who was already infamous for his lax oversight during the S&L crisis. Rather than eliminating the agency, manager rotation or front line examiner rotation policies could be used to reduce close connections, and would be more appropriately tailored to the scope of the problem. Closing the OTS made it a symbolic scapegoat for reform, but the potential for a race to the bottom remains.[14] To address this concern, one common recommendation is to remove the dual banking system. For example, former FDIC Chair Sheila Bair suggests eliminating the OCC and consolidating bank supervision under the FDIC, while leaving the Fed to oversee bank holding companies.[15]

Capture of elected officials calls for macro political reforms of both Congress and the industry. Campaign finance and lobbying reforms can target the influence of the financial industry in electoral politics. Furthermore, breaking up the largest financial institutions makes them more manageable to regulate, reduces the impact their potential failure has on the broader economy, and reduces their political influence. Reinstating Glass–Steagall would reconstruct former financial industry divisions, creating more contested political debates over financial deregulation.[16] This would allow elected officials more independence to pursue the public interest. Ultimately, layered reforms are necessary because types of capture are not mutually exclusive. Changes within the agency that ignore external administrative organization miss crucial contributors to capture. In turn, without reforms to the industry and elected officials, the impact of agency-specific reforms will be muted.

[1] This post summarizes the argument in Rex, Justin. 2018. “Anatomy of agency capture: An organizational typology for diagnosing and remedying capture.” Regulation & Governance. https://onlinelibrary.wiley.com/doi/abs/10.1111/rego.12209.