Advances in FinTech and the sharing economy are being driven by the growing demand for peer-to-peer connections that transform how people interact, work, consume, and produce. Although mass-adoption of blockchain faces many hurdles, the technology holds the capacity to create financial architectures which reorganize our society into a set of peer-to-peer networks, avoid single points of failure, and reduce concentrated market power.

Although not always required, a majority of blockchain applications entail the use of cryptocurrencies and cryptography-secured tokens (henceforth collectively referred to as tokens). Besides the well-known Bitcoin, over 2,000 different “altcoins” (alternatives to Bitcoin) have been introduced over the past few years.

Meanwhile, blockchain-based tokens have also gained popularity among investors. In initial coin offerings (ICOs), entrepreneurs sell tokens to investors around the globe. While some tokens are “security tokens” and derive their value from the issuer’s future cash flows, many ICOs are “utility tokens,” serving as the media of exchange on the associated blockchain platform. Here lies the innovation of blockchain technology – allowing peer-to-peer interactions in decentralized networks and anchoring the value of tokens to their collective usage as means of payment.

The ecosystem of tokens on a blockchain platform typically involves three types of agents: users, contributors (investors and workers), and initial developers (“founders”). First, tokens circulate among users as means of payment on the platform, which sustains the value of tokens. Second, tokens are used to solicit capital and efforts; in most ICOs, blockchain founders obtain capital from investors by issuing tokens. On incentivizing ongoing efforts, a salient example is Bitcoin. The quality of the Bitcoin blockchain depends crucially on the maintenance of a decentralized transaction ledger, which is achieved through miners’ computational resources. With a predetermined probability, a miner receives newly issued Bitcoins as compensation. Finally, founders typically hold a fraction of the tokens – which appreciate as the platform becomes widely adopted – as an incentive to construct the platform.

In order to differentiate between reckless speculation and valuable financial innovation, it is important to understand the roles that tokens play in blockchain economies and the interaction among users, contributors, and founders. In our recent paper, we clarify the token-based business model, and provide a coherent theory that addresses the following questions: (1) how to value tokens; (2) how tokens facilitate transactions among users and affect their adoption of the blockchain platform; (3) how to maintain and develop the blockchain platform tokens by eliciting ongoing capital and efforts from a dispersed global population in the age of the gig economy and on-demand labor and; (4) how to provide incentives to founders who design the original protocol and to avoid fraudulent design. In the following, we illustrate our answers to question 1 and 2, briefly discuss how to incorporate contributors and founders into our analysis, and examine how the dynamics of platform quality depends on the token distribution among contributors and founders.

A salient feature of many blockchain-based platforms is the embedding of native tokens as the required means of payment. This is obviously the case in payment applications such as Bitcoin and Ripple, but platforms focusing on other usages, such as decentralized file storage (e.g., Filecoin) or computation (e.g., Dfinity), also introduce native tokens. It is convenient to transact in a standard unit of account. Native tokens also enable smart contracting (e.g., Ethereum).

Another salient feature of tokens and their associated platforms is the network effects. The more users on the platform, the easier it is for a user to find transaction counterparties and enjoy the trade surplus. This user-base externality is also prevalent and particularly important in the early stage of adoption for social and payment networks such as Facebook, Twitter, YouTube, WeChat, and PayPal. We provide the first framework to analyze user adoption and token pricing under network externality. 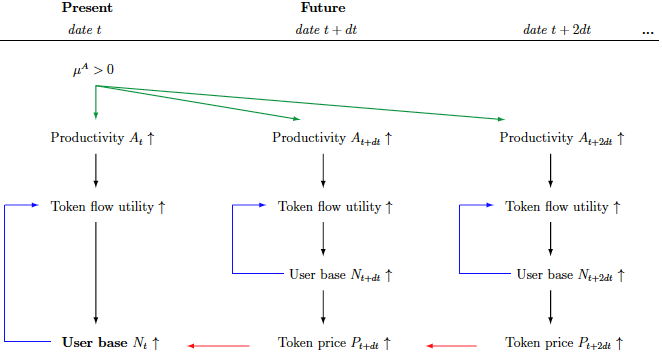 Notes: The green arrows point to the increases of the current and future (expected) levels of productivity A, where µA is the drift (growth rate) of the productivity process, which lead to higher flow utilities of tokens, and in turn, larger user bases N(black arrows). The blue arrows show that increases in user base result in even higher flow utility due to the contemporaneous user-base externality. Finally, more users push up the token prices P in future dates, which feed into a current expectation of token price appreciation and greater adoption (red arrows). The investment motive creates a stronger demand for tokens and greater adoption.

A Model of Dynamic Adoption and Valuation

Specifically, we consider a dynamic economy with potential users who differ in their needs to transact on the blockchain. Transactions give agents a flow utility that depends on agent-specific needs, the size of the user base, and the quality of the platform that loads on exogenous shocks. For the purpose of understanding token valuation and user adoption, let us take the quality as exogenous. Later, after introducing contributors and founders, we endogenize platform quality, and link it to the design of the token distribution policy.

In the model, potential users decide whether to incur the cost of adoption and how many tokens to hold for blockchain transactions. The holding of tokens exposes agents to token price changes and introduces an “investment motive” in addition to the “transaction motive”. Figure 1 illustrates the economic mechanism. Our dynamic equilibrium features an S-shaped adoption – the dormant growth in user base is followed by explosive growth, and eventually, the user base stabilizes as the platform becomes widely adopted.

On the quantitative side, we use data on token pricing and adoption for 16 major cryptocurrencies from 2010 to 2018 to discipline our choices of parameters in the model. We calibrate the model so that the initial adoption patterns match the empirical dynamics. This quantitative exercise allows us to intuitively understand the role of tokens on user adoption and the determinants of fundamentals-based token valuation. Moreover, by calibrating the model’s parameters to specific blockchains, we can extrapolate the user-based growth trajectory and forecast the token value.

One key contribution of our study is to clarify the roles of tokens on platform adoption. To this end, we compare platform adoption with and without tokens. Without tokens, user adoption is below the socially optimal level for a platform with improving quality because users do not internalize the network effects in their adoption decisions. Tokens increase welfare because agents foresee a token price appreciation, and thus, adopt more. Embedding tokens on a promising platform therefore front-loads prospective growth, as illustrated in Figure 2.[2] For an unproductive platform whose quality is expected to deteriorate, tokens precipitate its demise, which again can be welfare-improving. 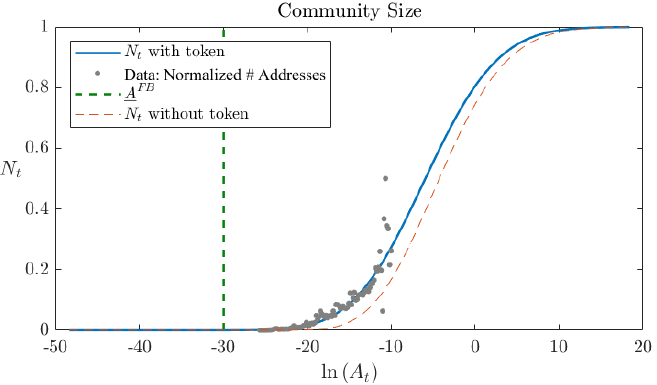 Notes: This figure plots four cases of user base dynamics against a measurement of the quality of blockchain platform, ln(At). The solid blue curve is the user base from our model of endogenous adoption and token valuation, which matches well with the grey dots, the real data of user base (proxied by active addresses) of major cryptocurrencies. In our paper, we describe the data in details. The green vertical line marks the level of platform quality, above which the first-best adoption level should be 100%, and below which, it should be zero. As we can see from the graph, the tokenized economy (blue solid) curve brings user adoption close to the first-best level relative to a same platform without native cryptocurrency (the red dashed curve). Also, below the first-best threshold, over-adoption induced by tokens is small in magnitude.

Second, we show that introducing tokens can reduce user base volatility, making it less sensitive to platform quality shocks. Consider a negative shock that lowers user adoption. This direct negative effect is mitigated by an indirect effect through token price – a lower adoption now means more agents can be brought onto the platform in the future. Therefore, agents’ expectations of token price appreciation induces them to adopt, and each agents’ investment motive dampens the volatility of the user base.

We provide the first dynamic token pricing formula, incorporating network externalities, endogenous user adoption, user heterogeneity, and the quality of blockchain networks. Jointly considering token price and adoption is important in practice. For example, in Figure 3, we show the stark comovement between the market capitalization of Ethereum and the number of active user addresses. 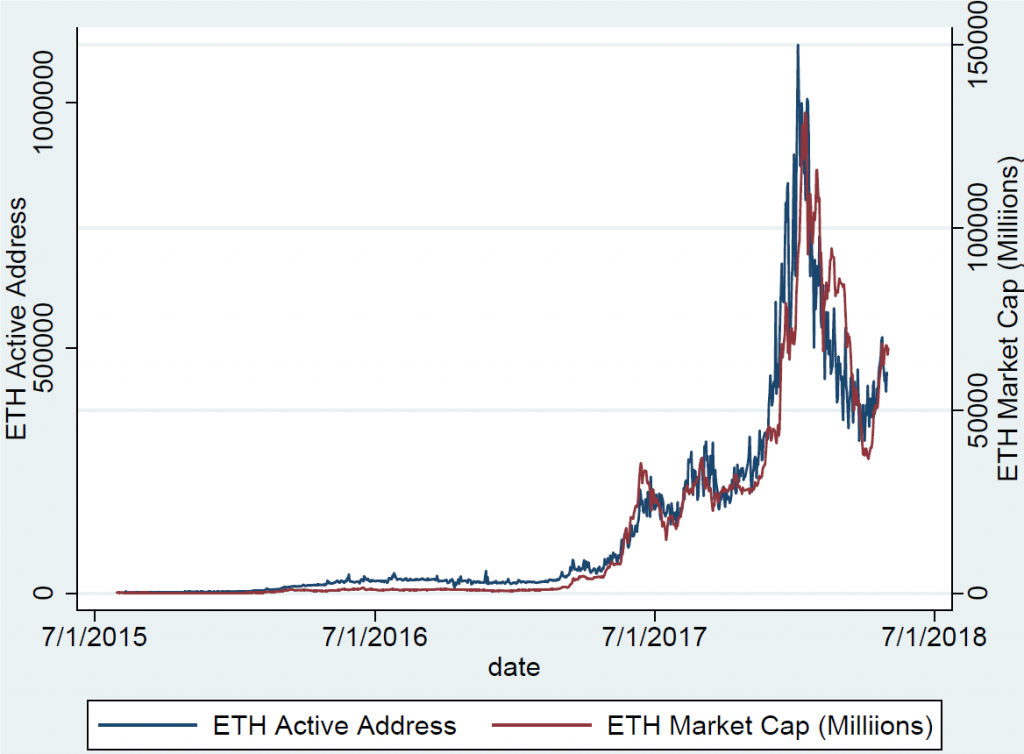 So far, we have taken the quality of a blockchain platform as given. In practice, maintaining and developing the platform is an ongoing concern. The key innovation of Satoshi Nakamoto, the founder of Bitcoin, is to elicit maintenance efforts by distributing Bitcoins to miners who contribute computational resources to maintain the Bitcoin ledger. In our next project, “Tokenomics: Dynamic Compensation for Decentralized Contribution,” we incorporate contributors to our analysis. A contributor can be a worker, for example an engineer who writes code for blockchain development, or a financier who contributes fiat or cryptocurrency investments. Contributors are paid in tokens, and their inputs drive the quality of the blockchain platform. Note that the total supply of tokens has to be restricted; otherwise, tokens lose their value even if strong user demand exists. Therefore, the fundamental trade-off in the design of token distribution is intertemporal – between the quality enhancement today and the preservation of tokens for future enhancements.

Last but not least, we address the issue of blockchain founders’ incentives. A key concern around initial protocol design is that founding developers may embed “back doors” that allow them to steal tokens later as the platform becomes widely adopted and the token price appreciates. In our analysis, we characterize the incentive-compatible token payout to founders that features vesting periods, which is common practice in ICOs.

Our model is flexible enough to accommodate additional features, such as platform competition and behavioral elements leading to bubbles and crashes. Our project is crucial for professionals and regulators, who all need to have a fundamental-based valuation framework for crypto-assets and understand how tokens and tokenized visual economies differ from traditional business models.

[2] A caveat is that the expectation of token appreciation may lead to over-adoption in the very early stage.