The first thing many people think of when they hear the term “smart contract” is a contract that is somehow transposed into computer code and runs without any human intervention.  This misses the mark by a wide margin.  Instead, smart contracts are better thought of as “conditional transactions” because they refer to the logic written in code that has “IF this, THEN that” conditions.  For example, it can easily be programmed in a smart contract that “IF on 1 October 2020, Bank A does not receive GBP 1,000 from Jack, transfer GBP 1,000 from Jack’s account to Bank A’s account.”

In many ways, the rise of new technologies, such as smart contracts, has the potential to help developing countries leapfrog more developed economies. In developed economies, the efficiency levels of the existing financial system are considered acceptable, and massive overhauls – like smart contacts – are generally not seen as needed. By contrast, in developing countries, the perspective is that since there are high levels of inefficiency, a massive overhaul is the only way forward.  In fact, the governments in many European Bank for Reconstruction and Development (EBRD) countries have shown a willingness to experiment with solutions and undertake transformative initiatives.[1]  For example, both the National Public Registry of Georgia and the e-Governance Agency of Ukraine have been working on introducing blockchain-based smart contracts in real estate transactions,[2] while the National Bank of Belarus is considering facilitating the use of smart contracts in banking transactions.[3]

A bit of background on smart contracts and their level of automatability is in order. Smart contracts may be particularly effective for sectors that operate using highly standardised contractual terms – without material deviations – and agreements with clear conditions and repetitive transactions.  For instance,  a smart contract could entail a loan agreement encoded so that the software automatically triggers a monthly loan repayment when the software receives an input confirming that it is the last day of the calendar month (i.e., without the need for human intervention or instruction) or so that the software automatically changes the monthly repayment amount where it receives an input confirming that there has been a reduction in the relevant reference interest rate (e.g., a central bank interest rate) – in each case the conditions can be objectively determined through the software’s code.

This is illustrated in Figure 1 below: Parties A and B enter into a smart loan contract.  The software is programmed to receive inputs from trusted data sources via an oracle and to automatically generate payment instructions based on those inputs, in accordance with the terms of the smart contract.  When the smart contract receives an input that it is the last day of the month, it uses the interest rate input to calculate the correct monthly repayment amount under the smart loan contract.  Then, the software automatically sends an electronic instruction to Party A’s bank to transfer this amount from Party A’s bank account to Party B’s bank account.  Party A’s bank acts on the automatically generated instruction and transfers the payment to Party B’s account. 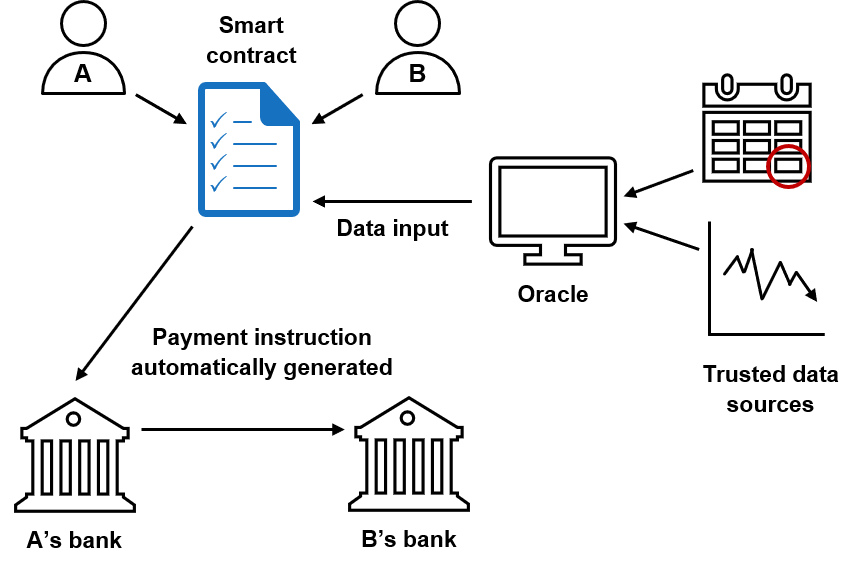 Another example could entail the sale of a house on the blockchain; after the buyer and the seller have executed the sale agreement, the buyer transfers the deposit amount to be held in escrow by the smart contract. In turn, and immediately prior to settlement, the lender can also send the loan amount to the smart contract escrow. After the total purchase price is sent to the smart contract escrow, the seller may finalise the transfer and trigger the smart contract to disburse the funds to its account and transfer the tokenised house to the buyer. The transfer is recorded on the blockchain and the state of title ownership is updated.  There are a few key critical assumptions in this example: First, the house has been tokenised, which means that a blockchain token that represents title to that house has been created. Despite media headlines about house sales on the blockchain,[5] there are a number of legal and technical challenges that need to be overcome for this to happen.  Second, the transaction does not involve anything more than a simple transfer of property, free from encumbrances, between two parties.  This is rarely the case in practice.

In contrast to the above examples, which include conditional “if this, then that” logic, with or without external inputs, conditional clauses requiring an assessment to be conducted “to the satisfaction” of a contracting party or to take action “in a commercially reasonable manner” are unlikely to be automated.  These elements require a subjective assessment of the individual circumstances and it may be difficult to express the relevant circumstances in software language or to automate them.  For instance, code could be used to represent the agreement that, if an event happened, the price will be adjusted by subtracting the product of x and y.  However, it is unlikely that code can be used to represent that, if an event happened, the price is to be adjusted by the party in a commercially reasonable manner.

Similarly, clauses that do not contain conditions, but merely determine arrangements (for example, clauses stipulating governing law or jurisdiction) can be encoded, but may not be automatable because they have no conditional logic.

The spectrum of automatability of contractual clauses can be represented in the following schematic: 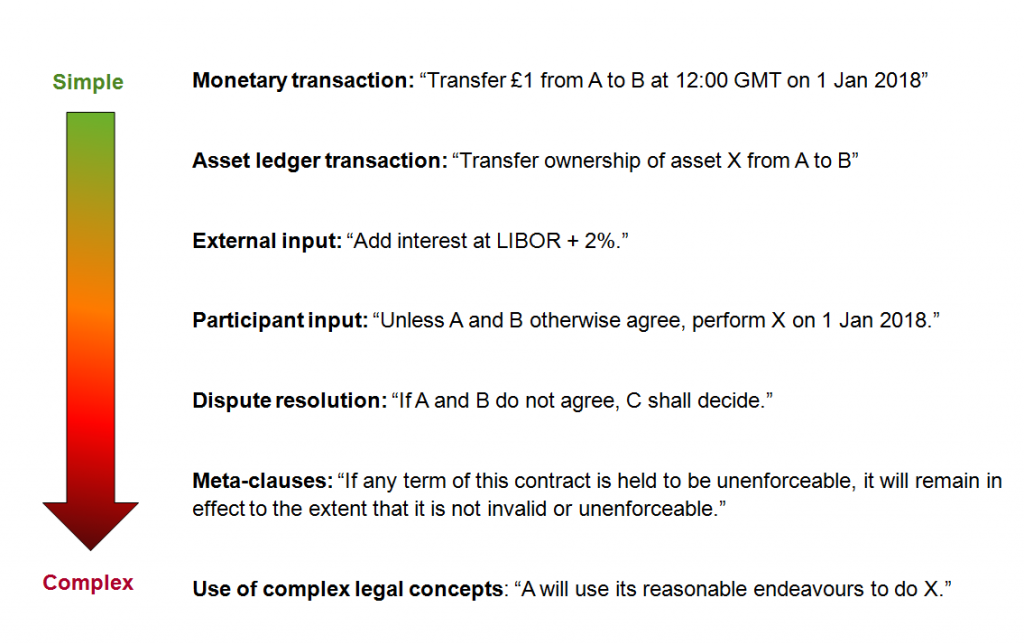 Tantalising though they are, smart contracts pose a wealth of legal questions.  If code performs in a way that the parties did not expect, what remedies will they have and against whom?  In the case of a smart contract between parties in different jurisdictions, which jurisdiction applies in the event of a dispute?  How can the pseudonymous nature of some blockchain transactions be reconciled with increasingly strict AML and KYC regulatory requirements? 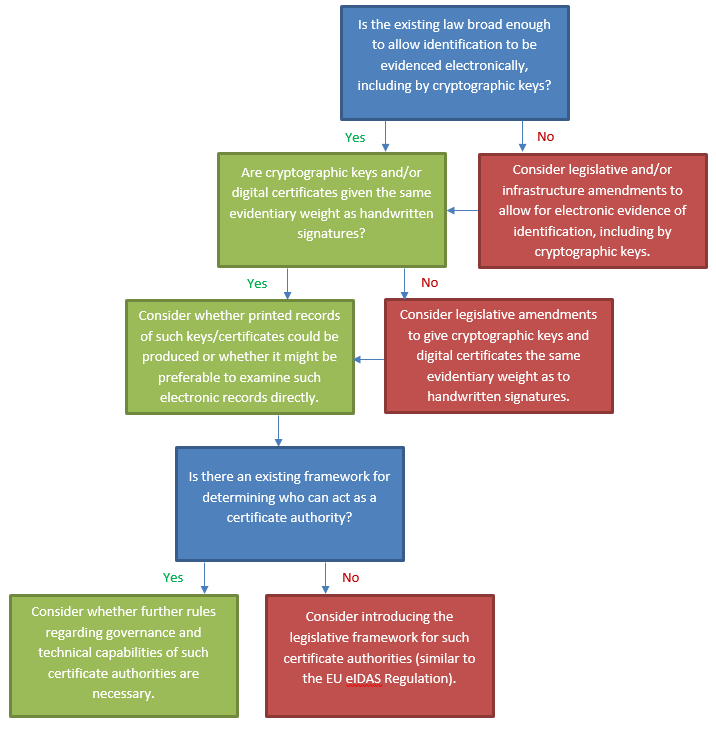 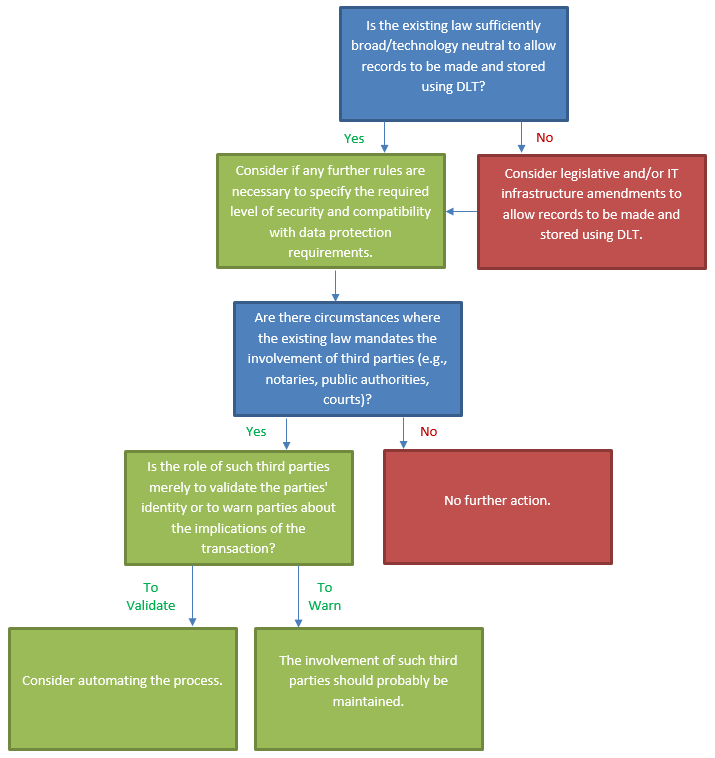 [1] By way of background, the European Bank for Reconstruction and Development (EBRD) is a multilateral development bank, which invests in central Asia, central Europe and the Baltic states, eastern Europe and the Caucasus, south-eastern Europe, the southern and eastern Mediterranean and Turkey.

[2] See Georgia to use smart contracts in real estate registrations (February 2018), available at: http://agenda.ge/news/96094/eng and A house has been bought on the blockchain for the first time (October 2017), available at: https://www.newscientist.com/article/mg23631474-500-a-house-has-been-bought-on-the-blockchain-for-the-first-time/.

[4] The lawyers in EBRD’s Legal Transition Team work on establishing laws, regulations and institutions that support the development of a predictable investment climate in EBRD’s region.

[6] You can access the full study and the accompanying animated videos at: www.ebrd.com/documents/pdf-smart-contracts-legal-framework-and-proposed-guidelines-for-lawmakers.pdf and https://www.ebrd.com/news/video/distributed-ledger-distributed-liability.html, respectively.