At the close of the year of the first Second Amendment cert grant in nearly a decade (setting Caetano aside), there are half a dozen petitions that have been discussed at conference and are awaiting the Court’s resolution of NYSRPA. That resolution could come next week, or it could take another 6 months. But one thing seems clear: with the new composition of the Supreme Court, the justices appear eager to more actively police the boundaries of the Second Amendment and advocates seem to have received the message.

Two cases are already up for discussion at conference in early January, Guedes and Worman. The former should not need to wait on NYSRPA for resolution, but I suspect the latter will be held. The next year is setting up to be another one where the Court could have a major impact on how the government can regulate firearms.

Does the Number of Guns Matter?

A pair of recent reports address the number of firearms being manufactured and already in circulation: one from the ATF (a 2019 AFME report/update on manufactured, imported, and exported guns for 2017), which, along with previous ATF annual reports, furnished part of the basis for an industry annual report published by the National Shooting Sports Foundation (NSSF) on December 4 (see also here for a nice brochure-style report with colorful tables).  The two big takeaways are that the NSSF now estimates there are 17.7 million “modern sporting rifles” in circulation (AR-15’s and similar long guns), and 423 million firearms total in the U.S. – the latter being a significantly higher number than major news outlets, nonprofits, criminologists, or public health researchers have been using for the existing stock of firearms.

Two weeks ago, the Center was fortunate to host an event in Washington, D.C. on the oral arguments in NYSRPA. Like much of the commentary on this blog, and from Center leadership in media outlets, the focus was both on the signals from NYSRPA about the current justices’ approach to Second Amendment questions and about whether the Court’s justiciability doctrine would keep it from reaching the merits here.

We are grateful that Nina agreed to share her insightful views on the current Court and the hints from oral argument. Check out the discussion I moderated with Nina, Joseph, and Darrell below. 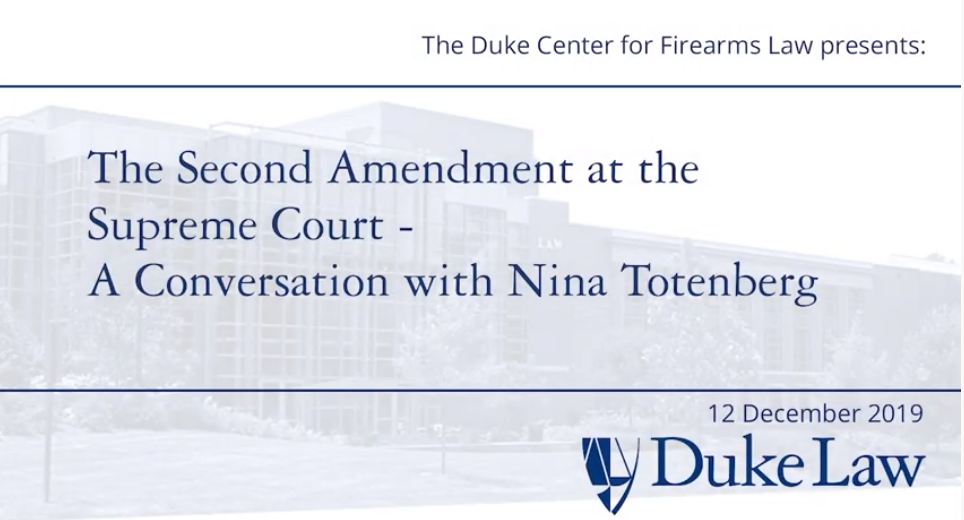 Another relatively quiet week on the Court’s gun docket. Two cases became fully briefed: Guedes which concerns the Trump Administration’s bump stock ban, and Worman, which concerns Massachusetts’s ban on assault weapons and high-capacity magazines. Guedes was distributed for conference in January, but Worman has not yet been scheduled for conference. (Lastly, I’ll just note that the responses in Matsura and Baker, are due on December 30 and January 2, respectively—barring any last minute extensions—so keep those lawyers drafting over the holidays in your thoughts. Similar timing for any potential reply brief in Malpasso. When I was in practice, I had a filing due December 28 one year and it was quite unpleasant.)

Guns and Lattes: Lethal Analogies and the Future of the Second Amendment

In New York State Rifle & Pistol Association Inc. v. City of New York, New York, the first gun case to reach the high court in almost a decade, gun rights advocates pushed their conception of the scope of the right in a novel direction.  The city regulation being challenged in the case restricted New York City residents who had obtained a premises license from traveling with their arms in public apart from a few well-defined exceptions. The challenged regulation did allow permit holders to take their weapons to firing ranges in the city but prohibited them from taking guns to a country house or firing range outside of the city.   Much of the oral argument focused on the fact that the original regulation at the heart of the case had already been repealed by the city and preempted by new state regulations that effectively barred the city from re-enacting the regulation. In the technical language of the law the case had been mooted.  One legal commentator even compared the case to the famous Monty Python sketch in which a dead parrot is palmed off as merely resting.  The irate customer eventually declares: “This is an ex-parrot.” Several justices, frustrated with the arguments presented by former solicitor general Paul Clement, stopped short of mimicking Monty Python’s John Cleese, but the underlying point was the same. There is no live issue in this case for the Supreme Court to adjudicate.  Most court watchers feel that because it no longer represents a live controversy, a requirement hard wired into the Supreme Court’s Article III constitutional power to hear cases, it will be mooted.

More on Text, History, and Tradition and NYSRPA

Much of the oral argument in NYSRPA v. New York City dealt with mootness: whether there was even a case or controversy before the court, as required by Article III of the United States Constitution.   But someday, whether in NYSRPA or some other case, the Court will have to address the question of which method to use to analyze the Second Amendment.  The two main contenders are the two-part framework, adopted by most of the lower courts; and text, history, and tradition, endorsed by a minority of judges, including now-Justice Brett Kavanaugh.

After all the excitement the last few weeks, it has been quiet at the Court for gun cases. No new petitions were filed this week, and we’ve seen no more movement on any of the pending ones. It also seems that NYSRPA is more than likely going to take a few more weeks or months, and not days, for the Court to issue its decision. We’ll be watching when the Court next convenes in the New Year!

On November 26, the Indiana Supreme Court denied review in an important case regarding tort liability for gun manufacturers and the Protection for Lawful Commerce in Arms Act (PLCAA): City of Gary v. Smith & Wesson Corp. The latest ruling leaves in place a Court of Appeals decision from last May, which in turn means that the case can finally proceed to trial.  This puts the case in the same procedural status as Remington v. Soto, in which the U.S. Supreme Court denied review two weeks earlier (the Indiana Supreme Court may in fact have been waiting for the SCOTUS decision about Soto before rendering its own ruling).

After oral arguments in New York State Rifle & Pistol Association v. City of New York, we’ve been poring over the transcript, listening to the audio, and reading all the reactions from Court watchers and others inside the room. We’ll have more to say in the coming weeks (including tomorrow night at our event in D.C. with Nina Totenberg), but for now we’re posting this annotated oral argument transcript with our take on what stood out to us. We’ve included comments on specific arguments and exchanges as well as highlights of particular phrasing or language that we thought noteworthy. Check it out! 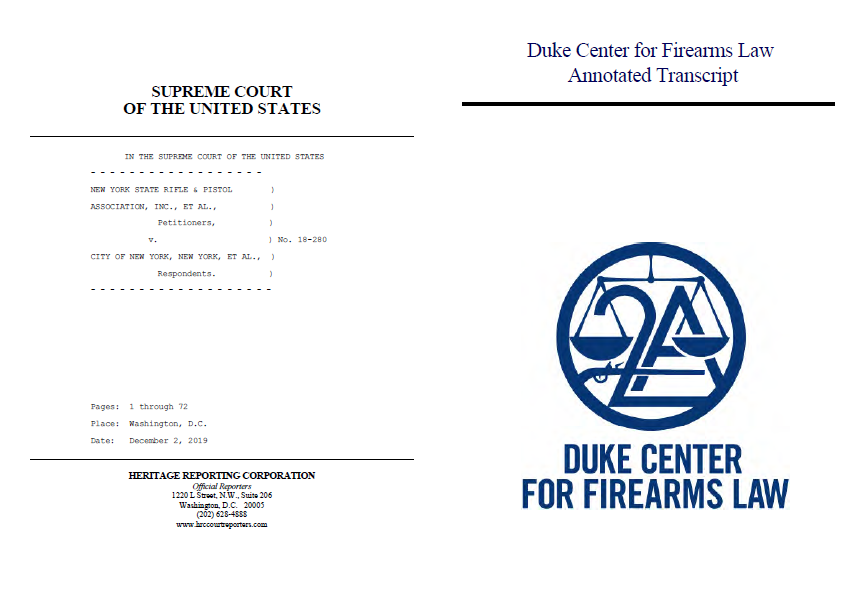 Two new student notes were recently published in their law reviews’ November issues. These articles add important insights to highly relevant areas of Second Amendment law that are still very much in flux. Check them out below with their abstracts excerpted.