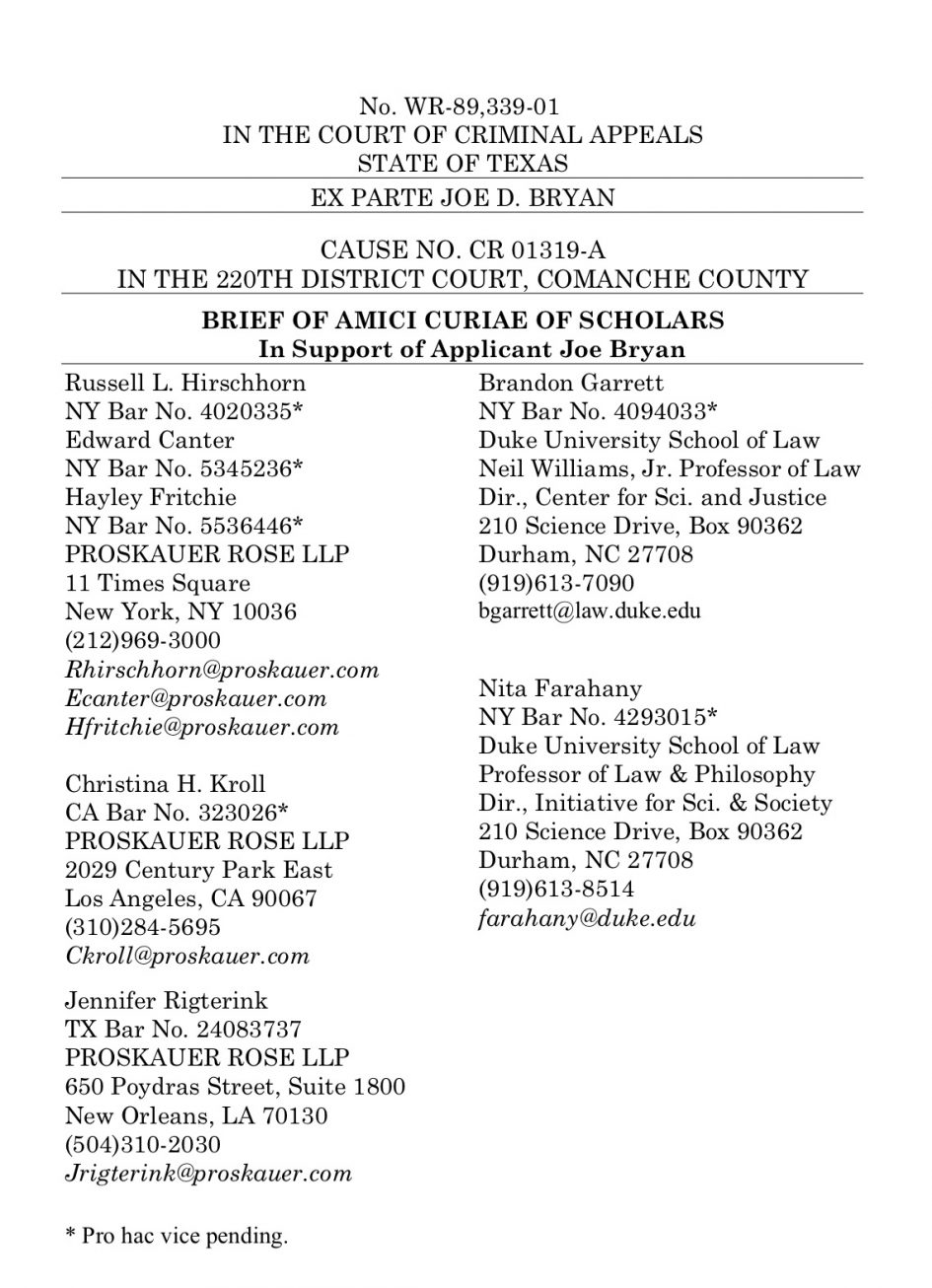 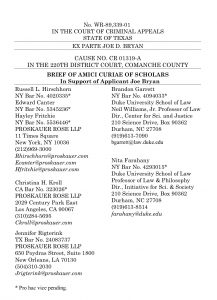 Yesterday, with outstanding help from Proskauer Rose, our Duke Law students in the Amicus Lab (Nita Farahany and I teach the course) filed an amicus brief on behalf of a remarkable group of signatories in the case of Bryan v. State. This is a pdf of the entire Bryan Amicus Brief and here is the summary of argument:

Joe Bryan was convicted of murdering his wife at two trials held in Clifton, Texas in 1986 and 1989. Bryan seeks relief under Texas Art. 11.073, which permits post-conviction relief based on “relevant scientific evidence” that “contradicts scientific evidence relied on by the state at trial.” We submit that new scientific evidence—not available at the time of Bryan’s trials—indisputably contradicts the evidence relied upon to convict him. At Bryan’s trials, Harker Heights police officer Robert Thorman presented blood pattern analysis (“BPA”) that he claimed established that a flashlight, later found in Bryan’s car, was held by the shooter during a close-range shooting. Significantly, however, Officer Thorman conceded that he had not done, was not qualified to do, and did not ask anyone else to perform, serological testing that could determine whether the material on the flashlight was in fact blood. Officer Thorman instead assumed that the spatter was human blood. Together, the BPA presented by Officer Thorman and the unfounded assumption that the spatter on the flashlight was blood, were critical to Officer Thorman’s conclusions, all of which were instrumental to Bryan’s conviction.

Since the time of Bryan’s trials, BPA has been subjected to more rigorous scientific research, substantial scrutiny of methods used in the past, and new awareness of the uncertainty inherent in BPA. The methods used and conclusions reached by Officer Thorman at Bryan’s trials have been discredited by subsequent scientific consensus. Specifically, Officer Thorman’s conclusions (1) that the flashlight had “high velocity” blood upon it, and (2) about the “area of convergence” of the blood spatter at the scene, have since been discredited. For instance, subsequent research has led the field to discard the use of the terms high, medium, or low velocity as wholly unfounded and unreliable indicators. Officer Thorman specifically concluded that this “high velocity” spatter was “blow back blood,” yet recent research has shown that a firearm, because it releases muzzle gas, tends to push material away from it and thus blow-back may not occur at all. Furthermore, research has since undermined Officer Thorman’s measurement methods regarding the area of convergence and the angles and distances involved at the crime scene and resulting conclusions.

In addition, research now highlights the role cognitive biases play in expert analysis of highly ambiguous evidence, such as BPA, particularly when, as in this case, the analysis is not conducted independent of the police. The National Academy of Sciences (“NAS”) has cautioned that such biases can profoundly affect BPA analysis, and studies have shown that it does occur.

Because Officer Thorman reached a series of unsupported conclusions, using methods which subsequent research has shown were deeply flawed, we believe that Texas Art. 11.073 provides the necessary vehicle for review. We write to describe how research on BPA has evolved since Bryan’s trials and how this new research negates the evidence presented at Bryan’s trials.