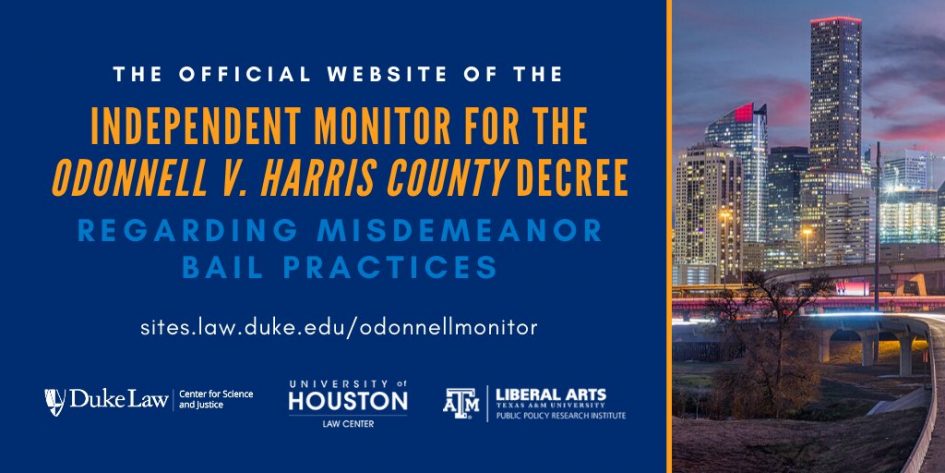 HOUSTON, T.X. – The independent monitors overseeing Harris County’s historic bail reform agreement filed its report this morning describing their first six-months of work and findings with the federal court, noting an increase in releases and a reduced use of cash bail.

The implementation of the ODonnell Consent Decree in Harris County, Texas – which encompasses Houston and, with nearly 5 million people, is the nation’s third most populous county – governs what happens to thousands of people arrested on low-level misdemeanor offenses.

Duke Law professor Brandon Garrett was appointed independent monitor and directs the seven-year monitoring project that includes ongoing analysis of Harris County data and intensive engagement with stakeholders. He works closely with deputy monitor Sandra Guerra Thompson, professor of law and director of the Criminal Justice Institute at the University of Houston Law Center, and with Dr. Dottie Carmichael of the Public Policy Research Institute at Texas A&M University.

“Early data shows that overhauling the bail system in Harris County is working,” Garrett said. “In a departure from past practices, a large percentage of people charged with low-level, nonviolent offenses are released promptly without having to pay cash bail. Gone are the days when a poor person would be locked up solely due to an inability to pay. For those who do not qualify for immediate release, they now have meaningful judicial hearings where defense attorneys are on hand to represent them.”

“Harris County officials are making impressive strides in making the judicial process more flexible and helpful in giving people the information they need to keep track of their court dates. To give one important example, they will be providing written forms, as well as text, voice and email notices in both English and Spanish. There is still much work to be done to fulfill the vision of the comprehensive Consent Decree, but we are really pleased with the progress so far.”

Initial findings from the monitorship team, which started its work on March 3, include:

For people who are not initially released, the pretrial hearings are far more robust, and individuals are now represented by public defenders.

For individuals who are released, they need to come back to court when their case is heard later, or they face real consequences if they fail to appear. To make it easier to appear, however, the county and courts are making huge improvements in accessibility and how they communicate about court appearances.

“An important part of the success of the Consent Decree is due to our team’s ‘Community Working Group,’” said deputy monitor Guerra Thompson. “The group is comprised of community leaders with experience in providing services for the homeless, survivors of domestic violence and sex trafficking, foster kids, immigrants, and others. We also have civil rights leaders, and representatives of the downtown business community as well as law enforcement.

“The group has met with county officials to discuss such critically important issues as racial and ethnic diversity, law enforcement data collection on ethnicity, preventing homelessness and unemployment by providing services for people who are released from jail, and community outreach strategies. I cannot overstate the importance of this ongoing dialogue between this diverse group of local leaders and county officials.”

Read more about the new report from local Houston media:

Read the full report below: